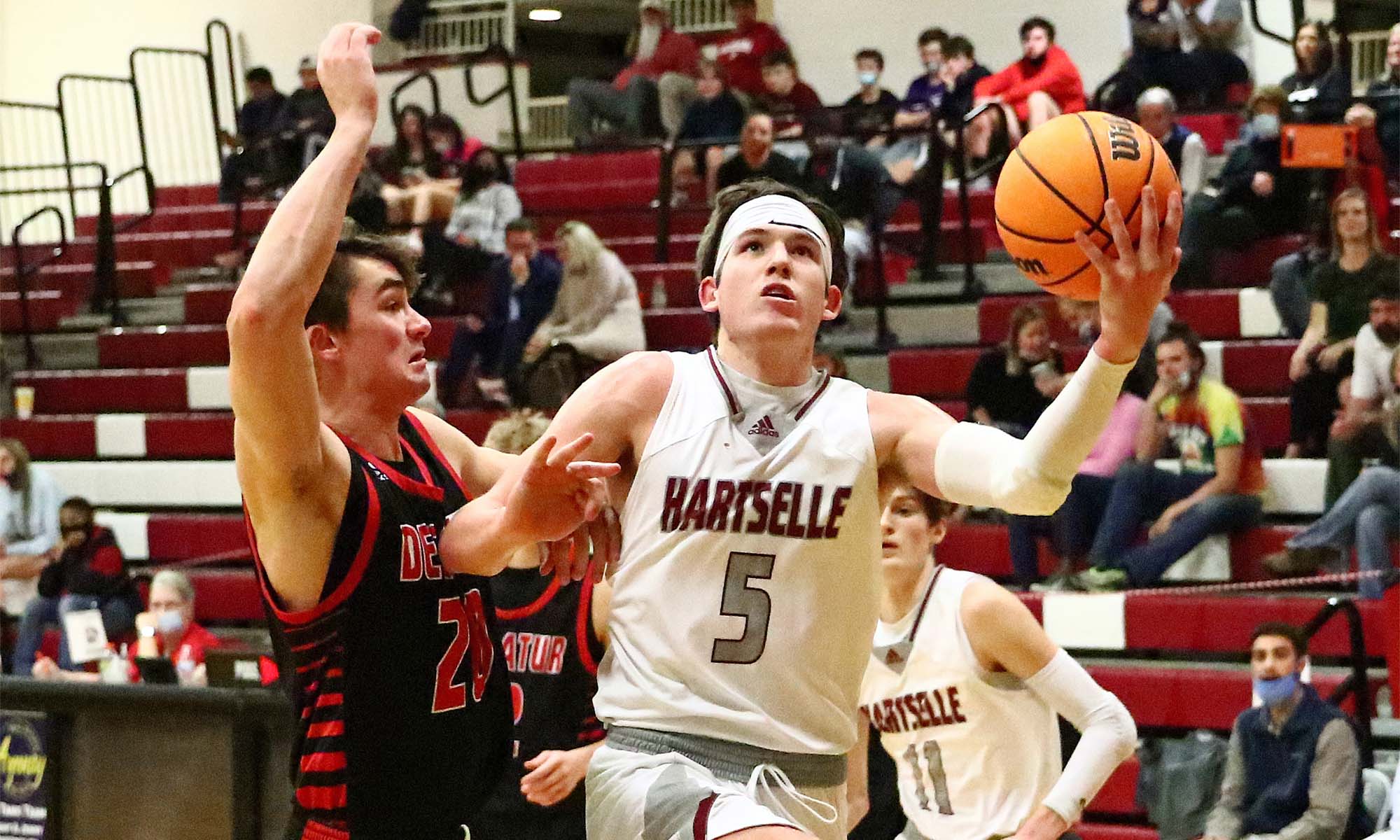 Hartselle's Trent Wright goes up for two of his 16 points as Decatur's William Pendley defends. Photo by James Meadows.

The postseason has arrived, and that means everything is taken up a notch or two. Everyone could tell when the 6A #1 ranked Hartselle Tigers took the floor Wednesday night that they were on a mission. From the coaches’ demeanor to the players, things have changed now that the postseason is here.

The first step of the top-seeded Tigers’ mission was an area tournament first-round match-up with fourth-seeded Decatur. Hartselle swept the Red Raiders during the regular season winning 82-68 on January 5th and 71-51 on January 15th. The Tigers entered the game with a 7-game win streak over Decatur. The Red Raiders’ last win in the series was a 53-49 win on January 9, 2018.

Hartselle jumped out in front 10-0 to open the game. Brody Peebles and Luke Ward each had four points to help the Tigers build the double-digit lead. A Kobe Johnson three-pointer got the Red Raiders on the board. Peebles scored four straight, including knocking down the Tigers’ first three-pointer of the game. Following a Malik Bryd basket for Decatur, Kiah Key hit a long three-pointer to give the Tigers a 17-5 lead heading to the second quarter.

Hartselle kept the pressure on in the second quarter as six different players scored for the Tigers. Peebles, Trent Wright, and Ryan Dunn combined for the Tigers’ first seven points in the quarter. Decatur kept Hartselle from pulling away early in the quarter with eight points to cut the lead to 24-13. A 10-2 run, including three-pointers from Key and Ward, helped Hartselle build their lead late in the quarter to 34-15. Following a Charlie Taylor three-pointer for Decatur, Wright capped off the second-quarter scoring with two free throws to give the Tigers a 36-19 lead at the break.

Hartselle came into the game with an emphasis on rebounding, according to Coach Faron Key. They did just that in the first half as they outrebounded the Red Raiders 20-7. The Tigers scored 12 points in the paint and had 10 points off turnovers.

Ward and Peebles hit back-to-back three-pointers to open the third quarter to push the Tigers’ lead to 42-19. The Red Raiders answered with a 9-2 run that included seven points from Johnson. Peebles hit his third three-pointer of the game to halt the Decatur run. Elijah Kellick followed with a rebound and put back for two to give Hartselle a 5-0 run and make the score 49-28. Johnson came back with five straight for Decatur to cut the lead to 49-33. Wright and Peebles scored six to close out the Hartselle scoring in the quarter capped off by a Red Raider three-pointer from Byrd. The Tigers headed to the fourth with a 55-36 lead.

Decatur opened the fourth quarter on a 5-2 run that cut the lead to 57-41. Hartselle’s Peebles and Wright teamed up for a 7-0 run to extend the lead to 64-41. The Red Raiders outscored the Tigers 8-6 down the stretch to make the final score 70-49.

Peebles finished with 28 points and seven rebounds to lead Hartselle (24-3). He now has 2,978 points for his career.

Wright added 16 points, eight rebounds, and a career-high four blocks for the Tigers. Ward had 10 points and five rebounds. Key and Dunn each had six points, while Kellich scored four.

Johnson finished with 20 points, while Byrd added 15 for Decatur (13-15), whose season came to an end with the loss.

Hartselle will face off with Muscle Shoals, a 60-50 winner over Cullman, in the area tournament championship game Friday at 6:00 pm.