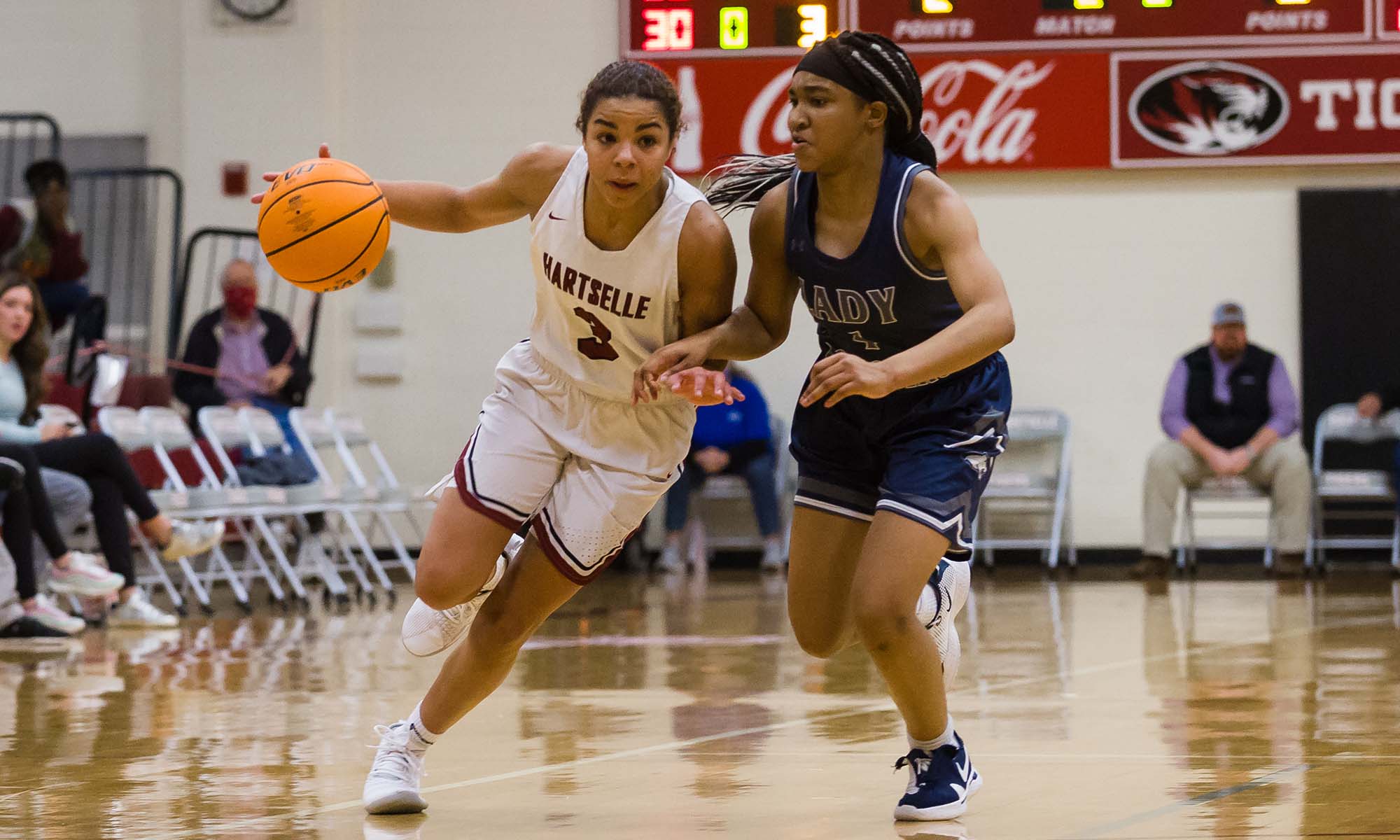 Masyn Marchbanks drives past a Clay-Chalkville defender in the Lady Tigers' 49-35 win in the 6A Sub-Regional. Photo by Mariann Parker.

The 6A No. 3 ranked Lady Tigers fell behind early but battled back for the 49-35 win thanks to their dominating defense.

Clay-Chalkville hit three three-pointers in the first quarter to propel the Lady Cougars to a 13-10 lead. Hartselle stayed close with three-pointers from Masyn Marchbanks and Lillyanna Cartee. Marchbanks finished the quarter with seven points.

The Lady Tigers opened the second quarter on an 8-0 run to grab an 18-13 lead. Cartee had four points in the run, while Karleigh Shipley and Marchbanks each added two points. Following Clay-Chalkville’s fourth three-pointer of the game, Hailey Holshouser scored five straight points to push the Hartselle lead to 23-16. The Lady Cougars hit a layup to cut the lead to 23-18 going into halftime.

After giving up just five points in the second quarter, the Lady Tigers’ defense continued to clamp down on the Lady Cougars in the third as they allowed only six points.

Maggie McCleskey opened the third-quarter scoring for Hartselle with a three-pointer to give the Lady Tigers a 26-18 lead. Following a Clay-Chalkville basket, Alyssa McMinemon hit two free throws to put Hartselle back up by eight, 28-20. The teams traded baskets to close out the quarter, with the Lady Tigers holding a 33-24 lead.

The teams continued to trade baskets to open the fourth quarter, with the Lady Tigers maintaining their nine-point lead at 37-28. The Lady Tigers went on a 12-2 run over the next four minutes, thanks in part to the defense. Eight of the 12 points came off turnovers forced by the Lady Tigers’ defense. McMinemon scored six points to help push the lead to 49-30 with 2:20 left in the game. The Lady Cougars scored the games’ final five points to make the final score
49-35.