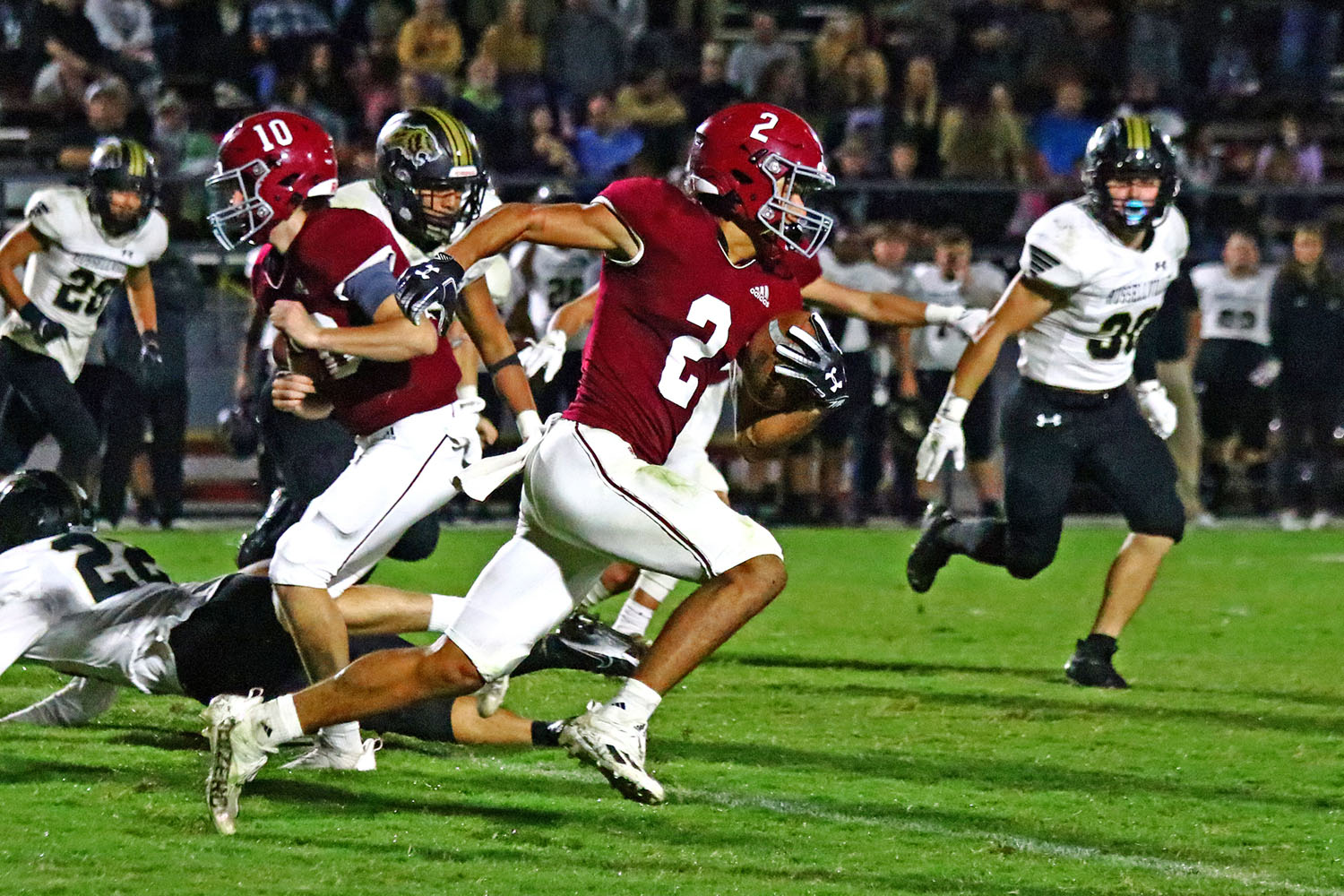 The 2011 State Championship team returned to JP Cain Stadium for a 10-year celebration Friday night, and the current Tigers played like the state championship squad.

Class 6A No. 5 Hartselle used a stout defensive effort to force five turnovers by Class 5A No. 6 Russellville in the Tigers’ 58-21 victory.

“This was a big win over a good football team,” said Hartselle Coach Bryan Moore. “We didn’t play well early but made some adjustments at halftime and came out and forced our will in the second half.”

Russellville opened the game with a drive that looked like it was heading for the endzone before the Hartselle defense settled in and forced a turnover on downs at their 19-yard line.

The Tigers responded with a 13-play, 81-yard scoring drive to take an early 7-0 lead with 2:43 remaining in the first quarter. The drive had seven passes and six runs.

The big plays in the drive were a 17-yard pass from JT Blackwood to Zeke Mchan and an 11-yard run by Ri Fletcher. Fletcher scored from eight yards out.

On the ensuing kickoff, Payton Steele recovered a Russellville fumble and gave the ball back to the Tigers. Armadheo Dunigan scored on a one-yard run with 11:56 remaining in the second quarter to give Hartselle a 14-0 lead.

Russellville responded with a five-play, 73-yard scoring drive to cut the lead to 14-7 with 10:28 remaining in the half. The drive started with a 33-yard pass play from quarterback Gabe Amick to Torey King. Conner Warhurst scored four plays later on a 38-yard run.

On the next drive, the Tigers suffered their first turnover after some miscommunication between Blackwood and Izayah Fletcher. Fletcher looked to run a hitch-and-go, but Blackwood threw a hitch right into the arms of the Russellville defender.

The Golden Tigers capitalized on the turnover with an 11-play, 48-yard scoring drive to tie the game at 14-14 with 3:11 remaining in the half. Warhurst scored his second touchdown from five yards out to finish the drive.

The Tigers began their last possession of the half at the 46-yard line, following a 30-yard kick return by I. Fletcher. The Tigers marched 49 yards in 12 plays to set up a 27-yard field goal by Crawford Lang that gave Hartselle a 17-14 lead with 7.2 seconds remaining in the half.

Blackwood and Dunigan connected on passes of 16 yards and 15 yards to fuel the drive.

The Tigers received the second half’s opening kickoff and quickly pounced. They extended their lead to 24-14 when R. Fletcher took a handoff and went 79 yards for a touchdown.

It was the longest play of the season for Fletcher, who has been battling an injury to start the season.

“Ri’s run was a big play for our run game,” said Moore. “He struggled early on due to injuries, but this run hopefully will open the floodgates for him. He has tremendous speed, and once he gets into the open field, it is hard for anyone to catch him.”

The game quickly changed on the next Russellville possession, when Walker Hoyle intercepted an Amick screen pass and went 29 yards for a touchdown and a 31-14 lead.

“I gave up a deep ball in the first half and was pretty upset by it,” said Hoyle. “We have seen that they like to use a screen pass, and I was able to jump in, pick it off and run it in for a touchdown.”

On the Golden Tigers’ next drive, Hoyle picked off Amick again – this time at the Tigers’ 34-yard line – to give the ball back to Hartselle.

“The Hoyle interceptions were game-changers,” said Moore. “Coach Pell and Coach Cole made a tremendous call on the first interception, and Walker made a great play on the ball on his second one.”

The Tigers went 48 yards in eight plays to set up Lang’s second field goal, this one coming from 35 yards out, to extend the lead to 34-14 with 7:11 remaining in the third quarter.

The Tigers forced Russellville’s third turnover of the game when Warhurst fumbled, and then Coleman Mizell recovered at the 49-yard line with 4:11 remaining in the half.

Hartselle took advantage of the turnover when Blackwood hit a wide-open Eli Tidwell for a 51-yard touchdown to push the lead to 41-14 with 3:20 remaining in the third.

After a Russellville punt downed at the Hartselle six-yard line, the Tigers went back to work.

Backup quarterback Jack Smith had runs of 14, 33, and 18 to quickly move the ball out of the shadows of the goalpost to the Russellville 30-yard line. Dunigan finished off the drive with a 32-yard run for a touchdown to give Hartselle a 48-14 lead with 10:57 remaining in the game.

The Golden Tigers tacked on another score when Malachi Duncan scored on a 26-yard run with 8:09 remaining.

I.Fletcher fielded the Russellville kickoff at the Tigers’ 11-yard line and ran 89 yards for a touchdown to extend the lead to 55-14 with 7:55 left. He broke numerous Golden Tiger tackles before getting to open field and the endzone.

Russellville’s fifth turnover came on a bad snap that Dylan Green recovered at the Golden Tigers’ 26-yard line with 7:16 remaining.

The Tigers finished the scoring when Noah Yates, playing in his second game, hit a 26-yard field goal with 3:45 left to extend the score to 58-21.

Blackwood was 18-of-28 passing for 193 yards and one touchdown. Tidwell had two catches for 61 yards and a score.  Izayah Fletcher had seven catches for 58 yards, and Dunigan had seven for 47 yards.

Ri Fletcher finished with 141 yards rushing and two touchdowns on nine carries. He had a 15.7 yards-per-carry average. Smith had 63 yards on six attempts, and Dunigan had 62 yards and a score on eight attempts.