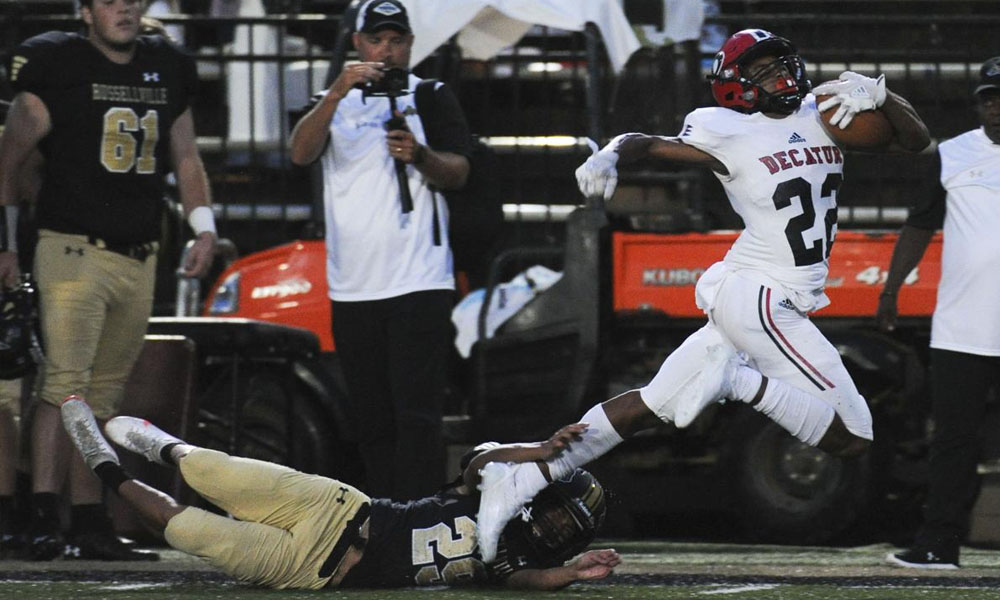 RUSSELLVILLE — Mistakes are a part of football, especially in season-opening games.

Unfortunately for Decatur, the Red Raiders made too many in the second quarter to survive at Russellville on Thursday night.

“Way too many mistakes,” Decatur head coach Jerry Adcock said. “We let some things happen that just can’t happen. It was disappointing.”

Russellville scored on two long pass plays in the second quarter. The Golden Tigers also turned a fumbled snap on a punt attempt into a second-quarter score.

Decatur is coming into this season after back-to-back 2-8 seasons. Russellville beat Decatur last year at Ogle Stadium, 28-0, in a game that wasn’t really that close.

This opener at Russellville was really closer than the final score. Decatur led 9-7 in the first quarter and had opportunities to make the score closer in the second half thanks to a stubborn Red Raider defense that allowed no points after halftime.

“We showed some heart in the second half,” Adcock said. “We played hard to the end of the game.”

Decatur’s touchdowns came courtesy of the passing combination of junior quarterback Ellis Dickman to junior receiver Jayden Brown. They connected on a 33-yard score in the first quarter and an 11-yard strike on the first play of the fourth quarter.

Senior running Keandre Williams made several positive runs in his return after missing last season with an injury.

Russellville struck first on its first possession. The Golden Tigers faced a second-and 13 from their 17. They used an eight-yard pass completion and a 15-yard run to put the ball at their 40. On the next play, TJ King got behind the Decatur secondary for a 60-yard touchdown pass from Gabriel Amick to make it 7-0.

Decatur answered with perhaps its best drive of the night. The Red Raiders moved from their 26 to the Russellville 6 using five quick-strike plays. Two runs by Banks Dement moved the ball to the 3. An incompletion on third down forced a field goal attempt that never happened because of a bad snap.

The Decatur defense got the Red Raiders’ first points of the season three plays later when Russellville running back Boots McCulloch was tackled in the end zone for a safety to make it 7-2.

Decatur returned the free-kick to the Russellville 38. Three plays later, it was Dickman to Brown on the 33-yard touchdown pass. Owan Poovey’s PAT gave Decatur a 9-7 lead with 2:34 left in the first quarter.

The second quarter was all Russellville. The Golden Tigers scored touchdowns on an eight-yard run by Connor Warhurst, a fumble recovered in the end zone after a bad snap in a punting situation, and on a 52-yard pass from Amick to King.

Decatur plays its home opener next Friday when the Austin Black Bears visit Ogle Stadium. The Black Bears have won the last six meetings in the River City rivalry.