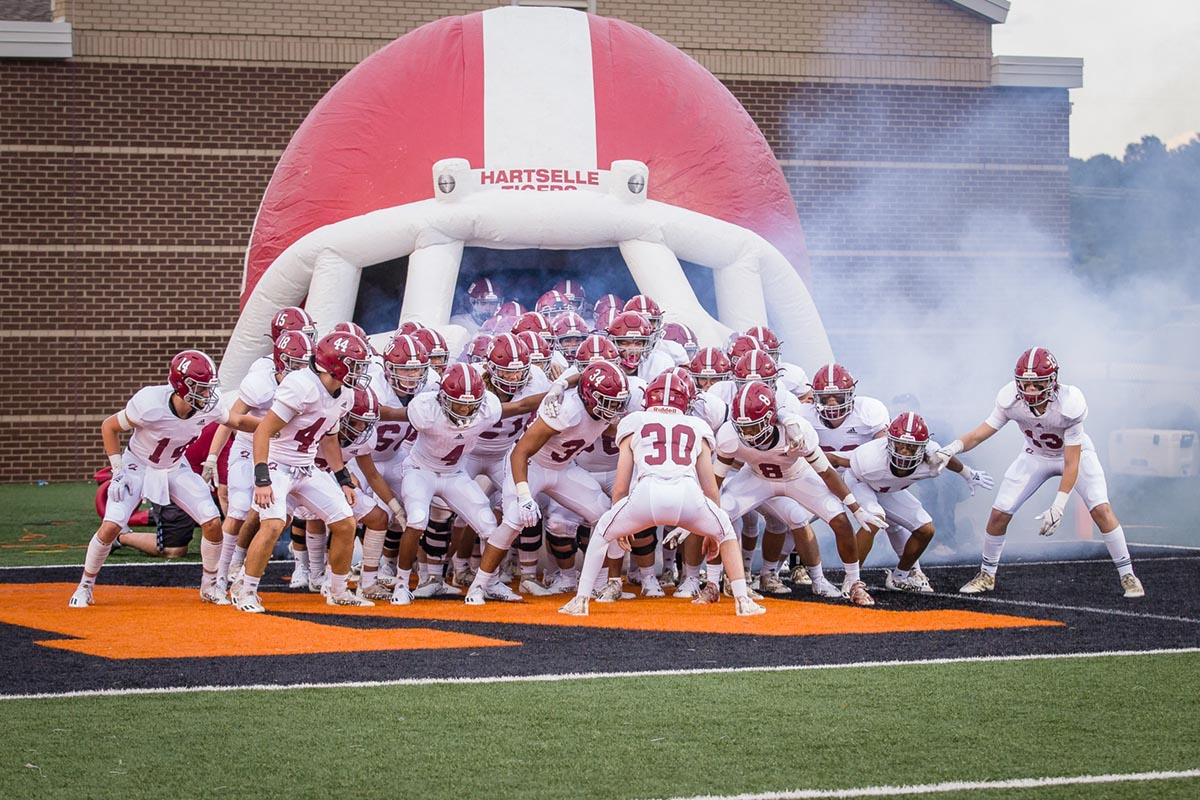 Hartselle traveled to Austin Friday night, looking to end a two-year losing streak to the Black Bears. Austin has dominated the series, winning six of the past ten, including 31-7 this past season and 45-14 in 2019.

The Tigers achieved their aim, notching a shutout over their in-county rival.

“This was a big win for our team,” said Coach Bryan Moore. “It is amazing to see the difference a year makes. Our guys are starting to believe in themselves, and that makes a difference.”

The Tigers entered the game as the more experienced team, returning 13 starters from the past season, while Austin returned four starters.

Hartselle took the opening kickoff and marched 66 yards in 11 plays before turning the ball over on downs at the Austin 14-yard line. The drive’s big play was a 29-yard completion from JT Blackwood to Izayah Fletcher.

In seven plays on their first drive, the Hartselle Tiger defense gave up 13 yards to the Black Bears, ending with a 28-yard punt.

The Tigers took over possession at their 45-yard line to begin their second drive. Blackwood hit Eli Tidwell with a 33-yard completion to start the drive.

The Black Bear defense tightened and forced Hartselle to attempt a 24-yard field goal, with backup kicker Cooper Lang filling in for his brother Crawford. Lang knocked it through the uprights to give the Tigers a 3-0 lead with 3:24 left in the first.

The Hartselle defense held Austin to consecutive four-play drives to give the Tiger offense good field positions to start their next couple of drives.

Hartselle was forced to punt on the first drive but capitalized on the next drive with a seven-play, 53-yard scoring drive. Armadheo Dunigan, who was filling in for starter Ri Fletcher, scampered 12 yards for a touchdown early in the second quarter. Following the extra point, the Tigers led 10-0.

A 28-yard Fletcher reception from Blackwood set up the touchdown run.

The Bears had their best drive of the first half on their next possession, as they had a nine-play, 38-yard drive going that moved the ball inside Hartselle territory for the first time.

The drive ended when Jakaleb Goodwin picked off Austin quarterback Gage Palmer in the endzone. He returned the ball out to the 12-yard line, where the Tigers would take over.

Hartselle capitalized on the Austin turnover with an 11-play, 88-drive that ended with a 20-yard Blackwood touchdown pass to the Dunigan to give the Tigers a 17-0 lead.

The Tigers defense forced Austin to punt the ball back to Hartselle with just less than 50 seconds left in the half. Hartselle quickly moved downfield with a five-play, 57-yard scoring drive.

Blackwood was 3-of-3 on the drive with a 15-yard completion to Fletcher, a 12-yard to Dunigan and a 23-yarder to RJ Gray to set up Blackwood’s 12-yard touchdown run.

The Tiger offensive line helped give Blackwood the push he would need to cross the goal line for a 23-0 halftime lead.

Hartselle had more than 300 yards of total offense at the break while limiting the Black Bears to 60 yards and four first downs.

Austin’s offense woke up in the third quarter, gaining 96 yards on 26 plays. The Hartselle defense forced the Black Bears to two turnovers on downs in the quarter.

Hartselle capped off the scoring with a nine-play 58-yard drive to start the fourth quarter. Blackwood had his second touchdown pass of the game, 34 yards to Gray. The score gave the Tigers a 29-0 lead.

Blackwood finished the game 18-of-26 passing for 308 yards and two touchdowns. He also ran three times for 19 yards and a score.

“This was a great team win tonight and something to build on,” said Blackwood. “My stats don’t mean anything. The only thing that matters is that we beat Austin.”

Dunigan, who took his first snaps as a tailback since the ninth grade, ran 12 times for 74 yards and a touchdown. He also had four receptions for 60 yards and a score.

“I knew it was going to be tough to fill Ri’s shoes,” said Dunigan. “The offensive line opened some holes and found a way through them. I owe all the credit to them.”

Fletcher finished with seven receptions for 111 yards, while Gray had four catches for 85 yards. Tidwell had three catches for 52 yards. He also had a 36-yard average on three punts, stepping in for Lang.

DJ Bishop, who was slated to be playing on the defensive side of the ball, ran the ball 16 times for 55 yards, with the majority of the yards coming in the second half.

Moore said the play of the game was Blackwood’s touchdown run with time running out in the first half.

“A pet peeve of mine is when the linemen don’t push,” said Moore. “The line got the push that was needed, but it all started with the toughness of JT.”

The Tigers finished with 465 yards of total offense, 308 passing and 157 rushing. The defense held Austin to 205 total yards.

Hartselle (1-0) will travel to Alabama A&M’s Louis Crews Stadium to face the Mae Jemison Jaguars (0-1) Thursday at 7 p.m. The game was moved from Friday night.

The Jaguars are coming off a 49-26 loss to Hazel Green.