Young returns at quarterback for Austin 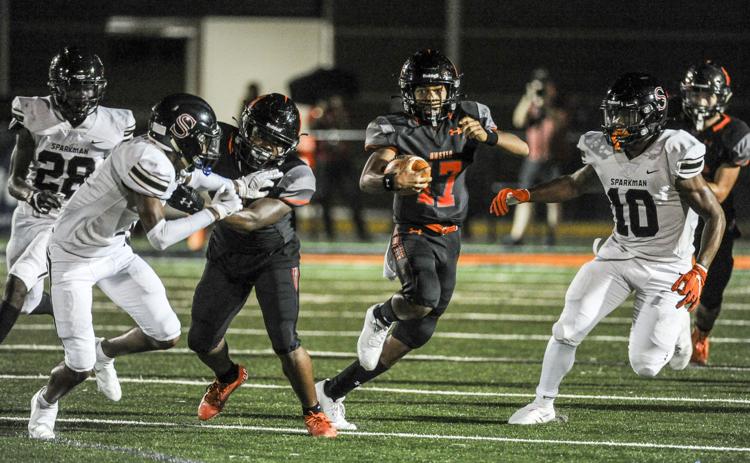 Austin quarterback De’Air Young has high expectations for this season.

After starting eight games last season, the senior is ready to lead the Black Bears to a championship.

If history means anything, there’s a pretty good chance it will happen. The last two times Austin went into a season with a senior quarterback, who had started as a junior, the Black Bears won region championships.

It happened with Paxton Montgomery in 2017 and it happened again with Quincy Crittendon in 2020.

“That’s the plan and I don’t see why we can’t make it happen,” Young said.

After six straight trips to the playoffs, Austin fell short of the postseason last year. A 1-5 start had a lot to do with it.

Young started last season in the backup role. After Austin’s offense sputtered early, he got the starting assignment in the third game of the season at Florence.

Austin would lose its next four games but recovered to win three straight before closing the season with a shutout loss at 6A powerhouse Mountain Brook.

“It just took me a while to get used to the speed of the game,” Young said. “It’s not the same as a junior varsity game.”

Young finished with 1,165 yards passing and 12 touchdowns. He also rushed for 440 yards and one touchdown.

After completing his junior season in basketball, Young turned his attention to preparing for the football season.

“I used to play baseball, but decided I needed to go all in for football after basketball season,” Young said.

The goal was to get stronger and bigger. Time well spent in the weight room has paid off. He’s up to 165 pounds on his 5-foot-9 frame.

“I was way too skinny and had to eat a lot just to gain 15 pounds,” Young said. “I usually eat a big breakfast every day. Later in the day, I love to eat seafood, especially shrimp. One of my favorite places is Subway. I love the foot-long club.”

Young has also placed a priority on being a better team leader. Playing quarterback is just a natural position for being a leader, but it’s not that simple.

“I’ve had to work on being more vocal,” Young said. “I’m not usually a loud voice on the field, but if you are going to be a leader it helps.”

A big difference in Young that keen Austin football fans will quickly pick up on this season is his new jersey number. Last year he wore 17. This season he’s wearing 2.

“My favorite number has always been 2 because of Cam Newton,” Young said. “He could do it all on the football field and led Auburn to a national championship. Cam was Superman.”

Running back Maurice Jones is a threat to score every time he touches the football. Receivers Nicholas Crayton, Cam Collins, and Ethan Wynn each stand 6-3 and can go high to bring down passes. Jaxon Potter is a receiver with great hands who has the knack for finding openings in pass coverage.

Add to the equation an Austin defense that is talented and has experience and it should be an interesting season for the Black Bears. After missing the playoffs last year, Austin could be a contender for the region championship.

“Going to the playoffs every year is part of the Austin tradition,” Young said. “That’s something we want to bring back this season.”