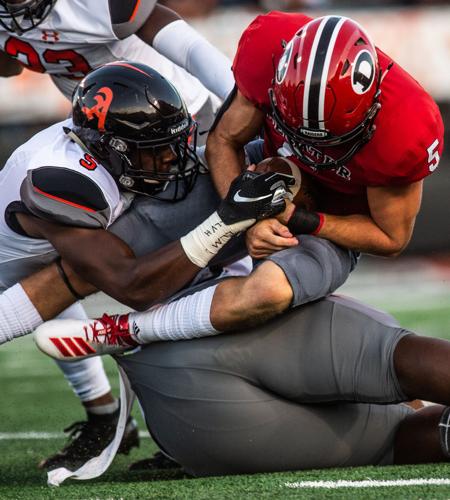 The Austin football family is mourning the death of 2019 All-State player Awysum Harris.

Harris was found dead Sunday in his dorm room at Alabama State in Montgomery. A social media post by Alabama State President Quinton Ross Jr. said his death appeared to be of natural causes.

“Awysum was an outstanding young man who made a great impact on Austin football, Austin High School, and the Decatur community. He was loved by all who knew him and will be truly missed,” Austin head coach Jeremy Perkins said. “Our thoughts and prayers are with Awysum’s mother, Sharay, brother, Asa (Martin) along with the entire family.”

Harris was a second-team Class 7A All-State selection at linebacker and a Decatur Daily All-Area selection after his senior season in 2019. His season stats that season matched his first name. He led the Black Bears with 105 tackles, including 14 tackles for losses. He also had three sacks and three interceptions.

One of Harris’ biggest plays in the 2019 season was an interception return of 25 yards for Austin’s first touchdown in a big 30-25 region win at Florence.

“Everything was good. He seemed happy,” Perkins said. “He talked about how Alabama State was trying to get some more weight on him so he could play in the defensive line.”

Harris was listed at 6-foot-3, 220 pounds in his senior season at Austin. The Alabama State roster listed him at 6-4, 216. In two seasons at ASU he had yet to see any action.

“I couldn’t sleep (Sunday) night thinking about Awysum,” Knox said. “He was a super young man who had a big smile and was loved by his teammates.

“He was a fierce competitor who was easy to coach because he chased greatness. He will be greatly missed.”

Harris was the half-brother of former Austin running back Asa Martin, who was Alabama’s Mr. Football in 2017 and now plays at Memphis.

In the spring after his junior season, Harris moved to Rome, Ga., to live with his father. That August, he moved back to Decatur.

“I got over there and nobody really knew me,” Harris said. “I was excited to have the opportunity to come back (to Austin) and play with the guys I grew up with. I just wanted to make the most of it. I wanted to have fun playing football, and I did.”

Besides being an edge rusher for Austin at defensive end/outside linebacker, Harris also played some tight end on offense to help with blocking. He also played on special teams.

“I was blessed tremendously by the time I got to spend with him at Austin,” Perkins said. “He will forever be an Austin Black Bear.”

Hartselle’s comeback comes up short in loss to Austin