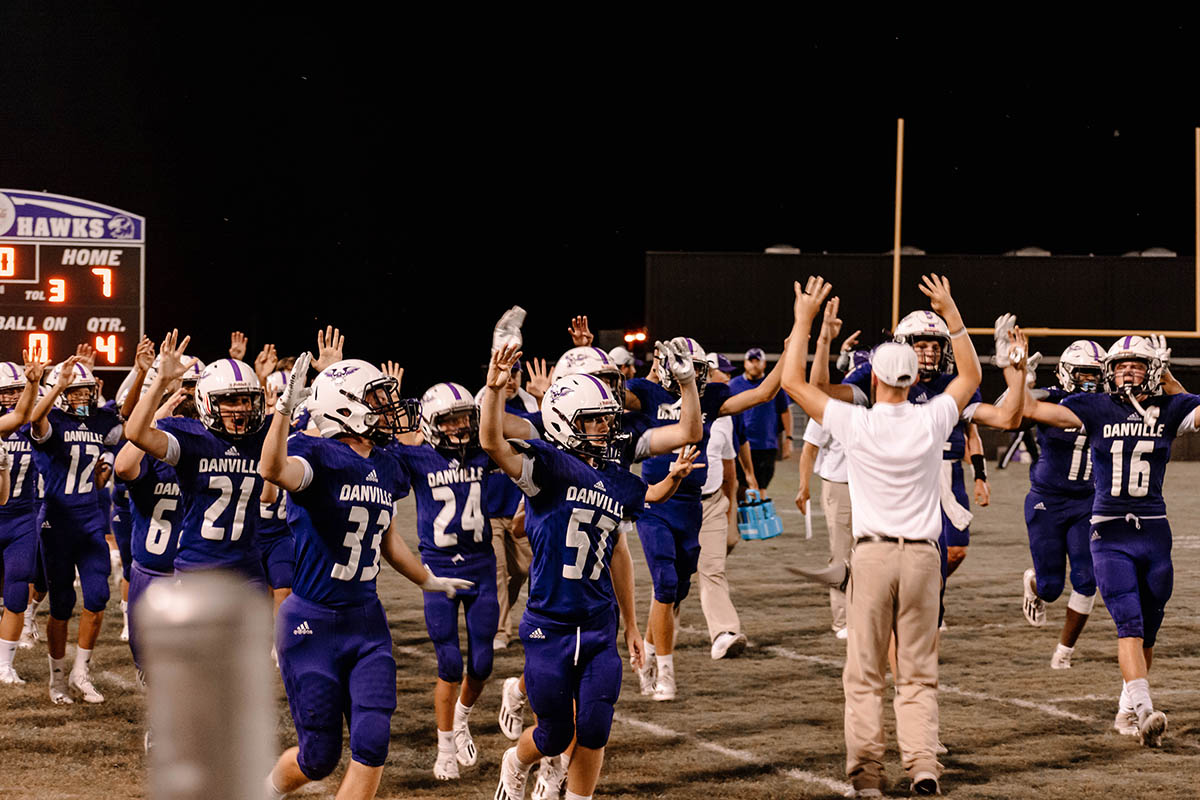 Danville fell behind on the first play from scrimmage but used a dominating rushing attack in the second half to control the ball and outscore the Blue Devils 27-0 to grab the win.

The Blue Devils were looking for their fourth consecutive win in the series.

Falkville received the opening kickoff and proceeded to go up 7-0. Caden Burnett connected with Isaiah Warnick on a 64-yard scoring strike on the first play from scrimmage. Warnick broke a couple of tackles on his way to the endzone.

The Falkville defense dominated the next two series by forcing two Danville fumbles inside the 30-yard line.

Kaden Worley recovered both fumbles, one following a sack by Jordan Greenfield and the other after he stripped Bo Huff following an eight-yard run.

The Blue Devil offense failed to convert either turnover into a score. They missed a 29-yard field goal and then turned the ball over on downs.

Danville had two drives of more than 50 yards in the first half but failed to get any points.

Falkville took a 7-0 lead into halftime, but the Hawks had all the momentum.

Danville opened the second half with a 14-play, 86-yard scoring drive that took five minutes off the clock. The Hawks used a methodical rushing attack that churned out 73 of the 86 yards. Gage Taylor scored the first of his three touchdowns, from two yards, out to tie the game at 7-7 with 6:43 left in the third.

Danville held the ball for 10:52 in the third quarter. That capped off the 16-play drive with a two-yard Tanner Colburn run to take a 14-7 lead.

Danville’s defense forced the Blue Devils into a turnover on downs on their next possession and took over the ball at the Falkville 42-yard line. Taylor scored from a yard out seven plays later to extend the Hawks’ lead to 20-7.

The Hawks capped off the scoring with a 12-play, 73-yard drive with 1:29 left in the game. Taylor scored his third touchdown on a two-yard run to make the score 27-7.

Falkville quickly moved the ball from the 17 out to the 48 with less than a minute to go before the Hawks ended the drive with an interception with 52 seconds left.

“Our team showed some resilience after falling behind early and losing the ball twice on fumbles in the first quarter,” said Danville head coach Andro Williams. “Our offensive line took over the game in the second half after we challenged them at halftime. We found some things at halftime that allowed us to dominate with our rushing attack.”