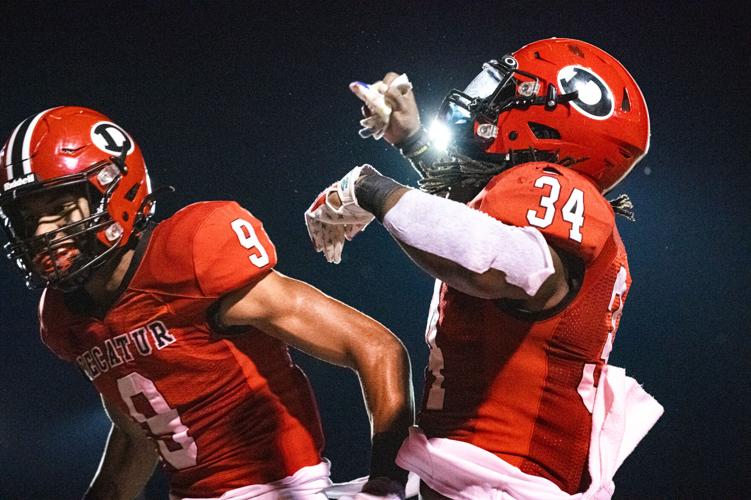 By R. Sirvell Carter For The Decatur Daily

Decatur (5-0) is off to its best start since 2016, when the Red Raiders compiled a 9-1 regular season mark (4-1 through five games) and reached the second round of the Class 6A playoffs.

“It was a great game,” Swoopes said. “(Hazel Green) was pretty good as well, but I think we just came out ready to play today.”

Decatur led Hazel Green 14-7 entering the second quarter, but Dickman threw a 32-yard touchdown pass to Duke at the 11:08 mark of the period. He added a 47-yard scoring strike to Brown with 7:33 left in the quarter. Turner tacked on an 8-yard run with 3:22 to go in the half, and Dickman capped the 28-0 quarter with a 2-yard run as the half expired.

Despite the score the Red Raiders were not satisfied with their performance.

“We didn’t play to our best on either side,” Kolby Brown said. Brown registered a sack for Decatur. “We did come out with a win. We competed how we were supposed to.”

Decatur coach Jere Adcock saw growth from his team as it finished with a blowout win.

“I think the maturity level of these guys is beginning to come forward,” Adcock said. “Just their desire to execute. They’re a very close group. They’ve got a lot of playing time under their belt, and they’ve gone through a tough three years to get here. Last year there were a lot of positive things happened. Last year’s senior class had a lot to do with where we are right now because of the work ethic and the character that they showed. We were so close to winning last year, but we just couldn’t get over the hump. We’ve addressed all of it. We’re working through it. We’re still a work in progress. We’re nowhere near as good as we can be.”

“It just shows how focused and committed this team is,” Dickman said. “We know what we have to do. Even though we’re 5-0 now we know we can’t let off the gas.”

Decatur will have next week off before three straight Region 7 games (Columbia, Muscle Shoals and Hartselle).

“It’s really good (having the open week),” Adcock said. “We need this. We’ve got some healing up we’ve got to do. We’ve got some guys that are banged up and we need a week to kind of take a little load off of them.”

Hazel Green will also have an open date next week before returning to Region 8 play by hosting Gadsden City on Sept. 30.