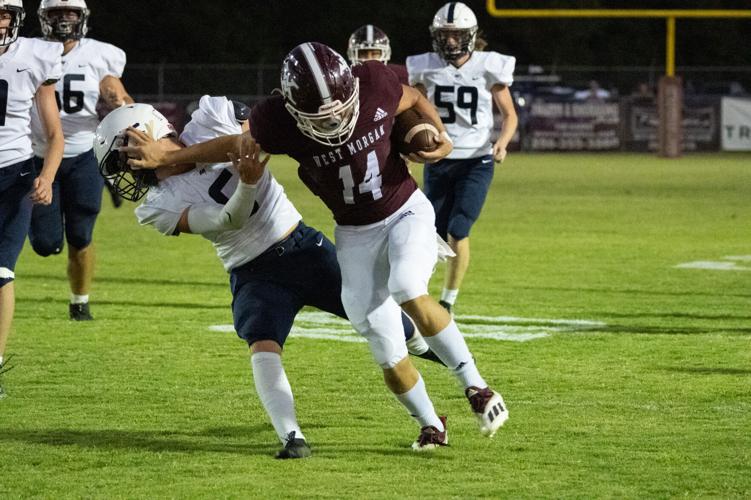 TRINITY – Expectations are high when two undefeated teams meet in the fifth week of the football season.

A packed house at West Morgan came looking for a great game Friday night, and they were not denied.

The West Morgan Rebels used a big fourth quarter to take a 35-16 win over the Rogers Pirates. Both teams entered the Class 4A, Region 8 contest at 4-0 overall and 2-0 in the region.

The game featured two hard-hard hitting defenses. Both teams returned interceptions for touchdowns. Both teams blocked punts that turned the momentum around in a huge way.

The difference in the game was West Morgan’s Jalen Fletcher. The junior came through big in the fourth quarter, which started with West Morgan hanging on to a 21-16 lead.

In the third quarter, West Morgan failed to pick up a first down on either of two possessions.

When the fourth quarter started, West Morgan needed someone to step up. Fletcher delivered. He scored on a 3-yard run with 9:54 left after bouncing off a host of defenders in the middle of the line.

Less than two minutes later, the speedy Fletcher broke the game open with a 61-yard punt return for the game’s final touchdown.

Fletcher finished the night rushing with 17 carries for 147 yards and two touchdowns. His first touchdown run was for 44 yards to put the Rebels up 14-6.

“I just look for a gap and, when I see it, I take off,” Fletcher said. “That’s what happened on the first touchdown and the punt return.

“I credit the work in the weight room for the second touchdown. That was one of the hardest hitting games I’ve ever played in.”

West Morgan’s other touchdowns came on a 1-yard run by junior Jeremy Strong and a 40-yard interception return by junior linebacker Ashton Garland.

The big play by Garland came in the second quarter and put the Rebels up 21-6. The play ignited the crowd and after the game earned Garland the team’s turnover straw hat.

“I was on a stunt to rush the passer,” Garland said. “Somebody got to him before I could, and I just saw the ball go up in the air.”

Garland grabbed the ball out of the air and raced to the end zone with a convoy of teammates. He was mobbed by his teammates on the field and later on the sideline.

“When I got the ball and started running, it seemed like everything was in slow motion,” Garland said. “After I got in the end zone, I turned around and saw everybody in the stands going crazy. That was just wild. I’ll never forget it.”

West Morgan’s defense held Rogers to 238 yards of total offense on 65 plays for a 3.7 yards average. The Pirates had 88 yards rushing on 34 plays for a 2.6 average. Rogers was six of 16 on third-down conversions.

Senior linebacker Jaxon Stutts led with 10 tackles, including one sack. Senior defensive back Matthew Jones had an interception.

West Morgan had 320 yards of offense and was five of nine on third down conversions.

Both Rogers and West Morgan are open next Friday. The teams jump back into region play on Sept. 30 with West Morgan at Deshler and Central-Florence at Rogers.