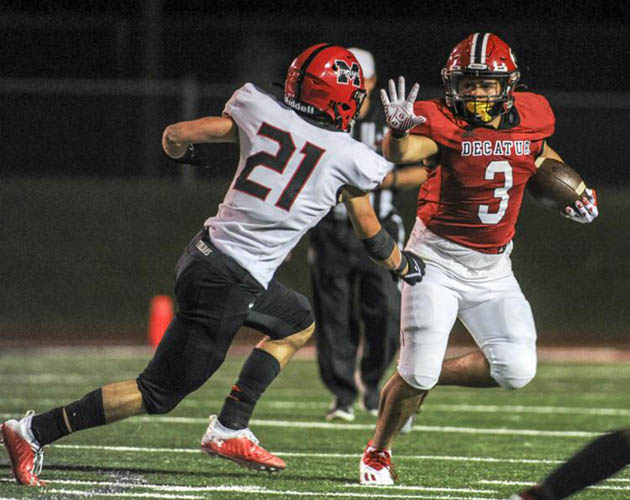 Perhaps Kirk should wear No. 15 for the Red Raiders. The reason is because the senior wants to make an impact like a former Decatur player who wore No. 15 back in 2016.

Running back LaDarius Woods wore No. 15 that season. He was a first-team All-State selection after setting a school record with 2,175 yards rushing and 18 touchdowns.

Woods had a combination of power and speed. He averaged 20 carries a game while running either through or around defenders – or making defenders run the other way in fear.

Defenses knew that when Decatur needed a big play on offense that Woods would usually be the first option. They still couldn’t stop him. He was what Adcock calls an “alpha dog” who could change the course of a game.

“I remember watching him play that season, and I’ve seen some film of him since then,” Kirk said. “That’s how I want to play this season.”

The Red Raiders will line up this season on offense in the spread formation like most teams do these days. Despite the formation, Decatur head coach Jere Adcock’s basic offensive philosophy is the same in his 27th season as head coach as it was in his first season. He wants his team to be able to run the ball.

A power running attack needs a power back. Decatur really hasn’t had one since Woods’ heyday. Kirk wants to be the answer this season.

“I tried to do that last season, but there were times when I could not finish the deal,” Kirk said. “Too many times I got caught from behind. Other times I couldn’t break past a single defender. In a close game, that can make a big difference. Something had to change.”

So Kirk decided to start the change with himself. To improve his speed Kirk joined the school’s track team. He did not compete in any meets. He just wanted to practice with the team to work on getting faster.

After track season ended, Kirk and teammates ZJ Matthews and Josh Turner worked through the summer on drills to increase their speed. Quicker starts and striding out more seems to have made a difference.

Another way to gain speed is not to carry as much weight to the finish line. That led Kirk to start staying away from his favorite fast-food stop.

Kirk’s go-to order of a double cheeseburger, fries, soft drink and a cookie is a thing of the past. Now his favorite meal is grilled chicken and vegetables cooked by his mother, Sarah Kirk.

“I feel like a whole new person,” Kirk said. “I can tell a big difference. I’m really glad I did it because I want this to be a special season.”

The new-look Kirk has not gone unnoticed by Adcock. The hard work to get better has not surprised the Decatur head coach.

“Ryan is going to be a difference maker,” Adcock said. “He’s a great team leader and can do so many things to make this team better. He’s a great example of what this senior class can accomplish. It’s a special group.”

Decatur is expected to have nine seniors start on offense and six on defense. Many of these seniors have played on the varsity as freshmen and started as sophomores.

“I think we have the best defense in our region,” Kirk said. “If they do their part and hold other teams down, we need to do our part on offense. If that happens, I like our chances of having a big season.”