Falkville’s Burnett eager to win for his hometown 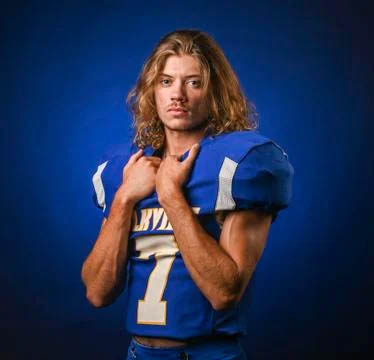 By Caleb Suggs For The Daily

FALKVILLE – For Falkville’s Caden Burnett, nothing is more important than his hometown.

The senior quarterback has spent his whole life in the small town, and to him there’s nothing better.

“It’s a huge part of my life,” Burnett said. “I started playing football behind the stands on Friday nights and all I’ve ever wanted to do is play in front of the lights.”

Burnett’s first season as the starting quarterback, though, didn’t go according to plan.

While Burnett put up decent numbers in 2021, throwing for 1,168 yards and 11 touchdowns, the Blue Devils lost their last five games. They finished 4-6 and missed the playoffs for the first time since 2016.

The difficult end to the season still leaves a sour taste in Burnett’s mouth.

“(It) wasn’t what we were going for,” Burnett said. “We’ve put a lot of work into bouncing back this season.”

“It was my first year so I had to learn a lot about reading defenses and coverages,” he said. “I also learned I can’t be so hard on myself. Nobody is harder on themselves than me and last year there were times where I would make a bad pass and then beat myself up on the sideline.”

“I’ve been working on that because that can’t happen this year if we want to succeed.”

Falkville head coach Seth Ward, who is entering his second season with the Blue Devils, says he expects Burnett to be even better this fall.

“The thing about Caden is if we asked him to play tackle then he would be one of the best tackles we had,” Ward said. “That’s just the kind of player he is. When he sets his mind on something, he’s going to be good at it.”

Falkville players say they believe expectations aren’t high for them this season, but Burnett believes they’ll surprise some people.

“I think we have a chance to shock some folks,” Burnett said.

And all the while Burnett will enjoy every minute of playing for the Blue Devils.

“This place is just like a family,” Burnett said. “And I’m determined to leave it better than I found it.”