Fighting back: Speegle and Mendoza have earned their way back to the field 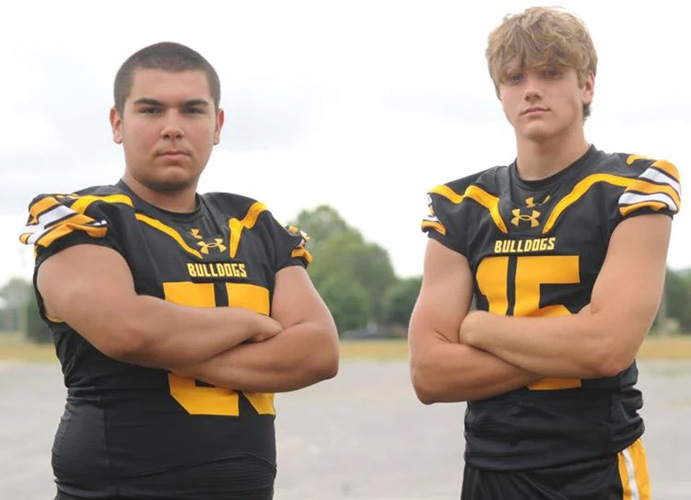 Larsen Speegle and Isaiah Mendoza have had to persevere for their chance to play high school football.

Speegle has endured not one, but two ACL injuries.

“The first ACL injury was hard because my sister had ACL injuries, so I already knew how tough it was,” Speegle said. “The second one was because the ACL (repair) didn’t take, it wasn’t strong enough. After that I knew I just had to work way harder the second time.”

“It’s really not yourself, it’s the people that you surround yourself with,” Speegle said. “You have to have people that will encourage you to keep going, because it gets tough.”

Speegle actually got his opportunity to play a season ago, stepping in to fill a role when the need arose.

“The start of the season I wasn’t doing anything, then we had a mishap and I got my chance,” Speegle said. “Being able to finally play in high school, it was an awesome feeling.”

Speegle will enter the 2022 season as a projected starter at linebacker.

On the other side, Mendoza endured an entirely different, but just as difficult battle as he was sidelined with COVID-19.

And unlike Speegle, who could look to his teammates for support, Mendoza was forced to face the issue mostly alone.

“It was tough. With injuries you’re still able to be there and be around everyone,” Mendoza said. “I was just sitting at home and all I could do was watch on my phone.”

“You just want to be there so bad,” he added.

Mendoza will step in as a starter for the first time, filling holes left on the offense and defensive line.

“It’s exciting to finally get my chance to show my coaches what I can do,” Mendoza said. “I just want to make every second count.”

Both players hope they can serve as role models for anybody that goes through what they did.

“I’ve had some guys who went through similar situations ask me for advice and I tell them you just gotta look for the light at the end of the tunnel,” Mendoza said. “Just stay strong and know you’ll be back.”