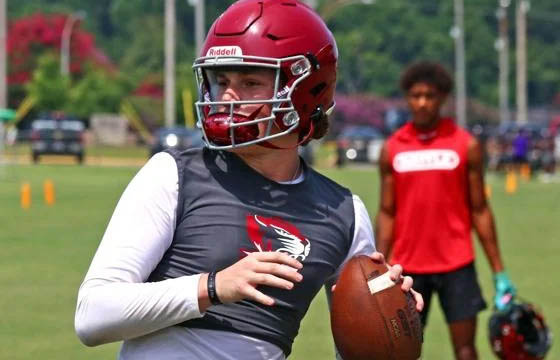 On May 20, Smith threw the final pitch in Hartselle’s baseball state championship victory.

In late July, the lefty announced he would take his 95 mph fastball to Arkansas next year to play college baseball.

On Aug. 19, the 6-foot-3, 215 pound Smith will be the starting quarterback in Hartselle’s season opener at home vs. rival Austin.

“It’s been really crazy and it’s been a lot of fun,” Smith said. “I can’t wait for football season to start.”

Hartselle coach Bryan Moore looks at quarterback as at least a two-player position. One is the starter and the other is the backup. The backup doesn’t just sit back and wait his turn. Moore finds other ways to take advantage of his athletic skills and get him involved in the game.

Last year as a junior, Smith was the backup and still played some at slot receiver, fullback and sometimes quarterback in running situations.

Senior J.T. Blackwood was the starter and led Hartselle to an undefeated regular season. The Daily 5A-7A Player of the Year threw for 2,180 yards and 20 touchdowns. He also ran for six more touchdowns.

“We feel like we can win with both kids at quarterback,” Moore said. “Both are great leaders and pull for each other to do their best.”

Smith thinks Hartselle’s run to the state championship in baseball has helped prepare him mentally and physically for football season. In the fifth inning of the baseball championship game vs. Pelham, Smith was suddenly moved from playing right field to taking over at pitcher. That happened when starter Elliott Bray got tossed after an incident at home plate.

“The play at the plate happened and everyone was going crazy,” Smith said. “Then the coaches were telling me to hurry to the bullpen to warm up. I didn’t understand why because I thought Elliott would finish it out.

“It all happened so fast that I didn’t have time to get nervous. It was go time. Maybe that was a good thing because I just concentrated on what I needed to be doing.”

Smith worked the final three innings and ended the game with a strikeout. After throwing his glove high in the air, he was tackled by a couple of his teammates and then served as the base of Hartselle’s celebratory dogpile.

“I think football helped prepare me for the celebration,” Smith said. “I got tackled by Bray and (catcher) Cam Palahach and that put me down in a hurry. Then everybody piled on top of us. Hopefully I won’t get hit by that many guys at the same time in a football game.”

Before the baseball season ended, Smith was being heavily recruited. Alabama, Auburn, Tennessee and Southern Miss all made offers, but it was Arkansas that got the prized prospect.

“Arkansas came into the picture late, but I wanted to see their facilities before I made a decision,” Smith said. “I visited and knew right away that it was where I needed to go.”

Landon Blackwood will follow a similar path that Smith took last year. He will play some slot receiver. That means he may be catching a football from a quarterback who can throw a baseball 95 mph.

“When he throws it your way it’s coming in red hot,” Blackwood said. “Since he throws it left-handed it spins in a different direction, too. You really have to focus on catching the ball.”

Blackwood plans to watch and learn from Smith like he did from his older brother last year. When fans see Landon on the field this season they may do a double take. Landon will be wearing the No. 12 jersey that J.T. wore last year instead of the 10 he wore last season.

“It’s a family thing. Our Dad wore No. 12 when he played football,” Blackwood said.

Smith will be wearing a different number this season, too. He’s switching from 13 to 7.

“My dad had an old tape of Bama winning a national championship (1992) with Jay Barker at quarterback,” Smith said. “I thought the No. 7 jersey looked really cool and have always wanted to wear it. Now’s my chance.”