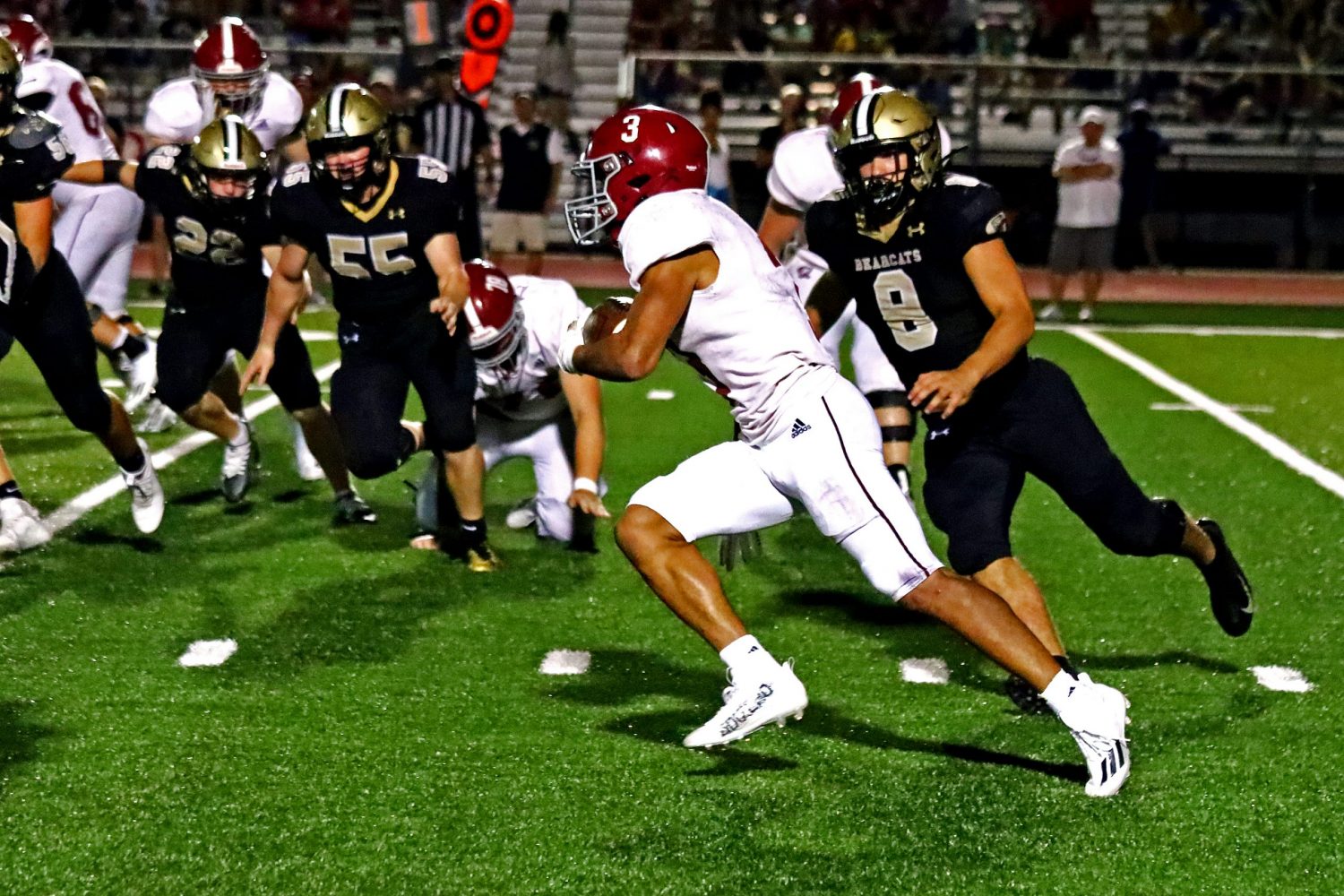 Fletcher breaks through the Bearcats’ defense on the way to his fourth touchdown of the Tigers’ 34-3 win over Cullman. Special to the Enquirer/Jim Meadows

The Hartselle Tigers have enjoyed their time at Woodard Stadium the last two seasons. Coming off a 35-14 win last season, the Tigers proved that win was no fluke by taking care of the Bearcats 34-3 on Friday night.

“It is always good to get a win over Cullman,” said Hartselle coach Bryan Moore. “I am proud of how our team came out and did what they needed to start region play 1-0.”

Hartselle jumped out in from 7-0 on their first possession when Ri Fletcher scored on an eight-yard run. He set up the drive with a 40-yard punt return that gave the Tigers the ball at the Bearcats’ 20-yard line.

After the Tiger defense forced another Cullman punt, Hartselle’s offense led by Jack Smith returned to work from their 45-yard line. Smith completed two passes for 16 yards and ran for eight to put the Tigers inside the Bearcats’ 30-yard line. Fletcher went 28 yards on the next play, setting up his second touchdown of the night and giving Hartselle a 14-0 lead.

Early in the second quarter, after another Cullman punt, the Tigers took over at their 12-yard line. Smith quickly moved the Tigers, hitting seven of eight passes on the drive for 68 yards. The offense had to settle for a 36-yard Crawford Lang field goal to increase the lead to 17-0.

After a shanked Cullman punt, the Tigers took over at midfield with 5:23 remaining. Smith hit three different receivers 47 yards in moving Hartselle down to the one-yard line. That is where Fletcher added to his touchdown total with a scamper around the right side for his third of the game. The Tigers led 24-0 with 4:00 minutes remaining in the half.

Cullman put together their best drive of the first half thanks to an unsportsmanlike penalty on the Tigers. They moved the ball inside the Hartselle 50 before Peyton Steele picked off a Ryan Skinner pass inside the Tigers’ 15-yard line. He returned it to the 27-yard line with 55 seconds left in the half.

Smith quickly moved Hartselle out to midfield, but the Bearcats’ defense came up with two consecutive sacks of Smith to end the drive at the half.

Cullman finally got on the scoreboard in the third quarter when Nate Zills connected on a 50-yard field goal with 7:48 remaining. Zills would later miss on a 30-yarder and a 52-yarder.

After a Cullman missed field goal, the Tigers took possession at their 20-yard line with 8:27 left in the game. Fletcher took the pitch and went 80 yards for his fourth touchdown to put the Tigers up 31-3.

Lang capped the scoring for the Tigers when he hit a 40-yard field with 2:13 left in the game. His field goal was set up by a 42-yard pass from Landon Blackwood to Drew Gilbert.

Eli Tidwell had five catches for 80 yards, while Izayah Fletcher had seven catches for 40 yards.

“We still have things we need to work on to become a better team,” said Moore. “We must have a good week of practice to prepare for next week.”

Hartselle (3-0) heads into Homecoming Week with a matchup against Columbia (0-3).