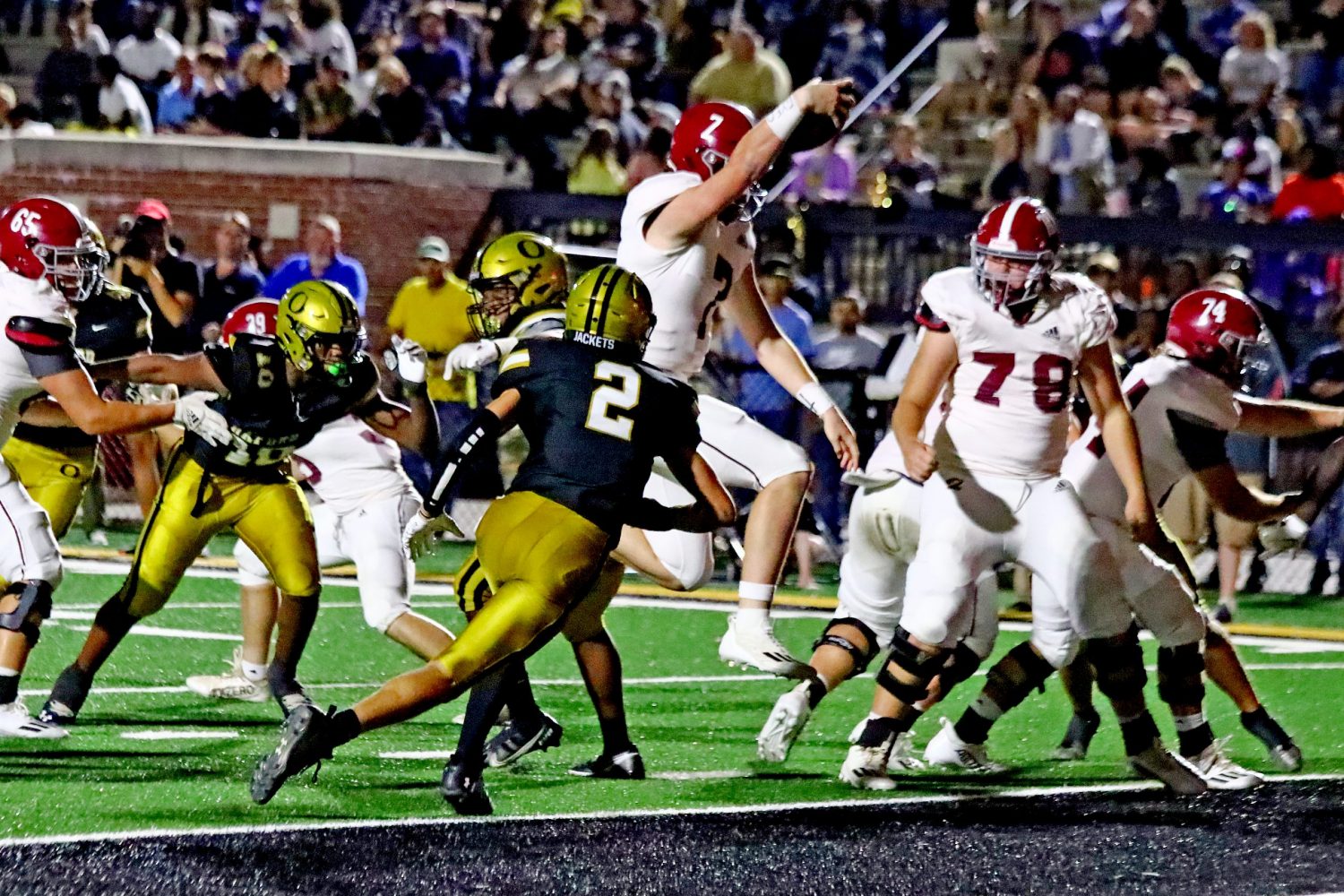 Jack Smith scores his third rushing touchdown in the third quarter of the Tigers’ 69-21 win at Oxford. Photo by Jim Meadows

Hartselle bounced back from last week’s disappointing performance with a dominating 69-21 victory at Oxford.

“We had a great week of practice leading up to tonight’s game,” said Hartselle coach Bryan Moore. “A lot of work and buy-in went into tonight’s performance.”

The Tigers’ Jace Meadows blocked Oxford’s first punt to grab excellent field position inside the Oxford 40-yard line. Hartselle took advantage of the field position and scored on their first possession when Ri Fletcher scored on a one-yard plunge to put the Tigers up 7-0.

Oxford answered the Hartselle score with one of their own on a three-yard run with 4:58 left in the first quarter.

Crawford Lang put the Tigers back in front at 10-7 when he nailed a 43-yard field goal with 2:32 left in the first.

However, Oxford drove 80 yards to take a 14-10 lead when they connected on a 32-yard touchdown pass with 10:58 left in the second quarter.

Oxford tossed their second touchdown pass of the game with 7:03 left in the half to take a 21-17.

Hartselle responded with a 37-yard Jack Smith touchdown with 4:48 left in the half to lead 24-21. Hw scored his second touchdown there minutes later on a nine-yard run to put the Tigers up 31-21 with 1:07 left.

Oxford drove the field have had a final toss to the endzone that was dropped as time expired in the first half.

The second half was all Hartselle as the Tigers outscored the Yellow Jackets 38-0.

After being held to three points on their first two drives of the second half, Hartselle’s defense and special teams took over with three consecutive touchdowns.

Drake Borden had an interception that led to the Tigers’ next touchdown, and then he scooped up an Oxford fumble and raced 28 yards to put the Tigers up 55-21 with 4:10 left in the third.

Less than three minutes later, the Hartselle defense got a fourth down stop to take possession of the ball at the Oxford 41-yard line. On the first offensive play, Smith hit Fletcher for a 41-yard touchdown pass and a 62-21 lead.

With 9:59 remaining in the game, Lincoln Bryant capped the Hartselle scoring with a 48-yard touchdown run to make the final score 69-21.

Smith finished with three rushing touchdowns and a passing touchdown to lead the Hartselle offense.

“My first touchdown was on a blown play that I was able to turn into a 37-yard run for the score,” said Smith. “I am proud of how we came out firing on all cylinders after last week’s performance.”

“Jack played lights out tonight,” said Moore. “He bounced back in a huge way for us tonight.”

Fletcher added a rushing touchdown, one receiving, and a punt return for a score.

Borden had an interception and fumble return to lead the defensive effort in the third quarter.

Hartselle (6-0) travels to Muscle Shoals (5-0) next Friday for a n important region matchup.