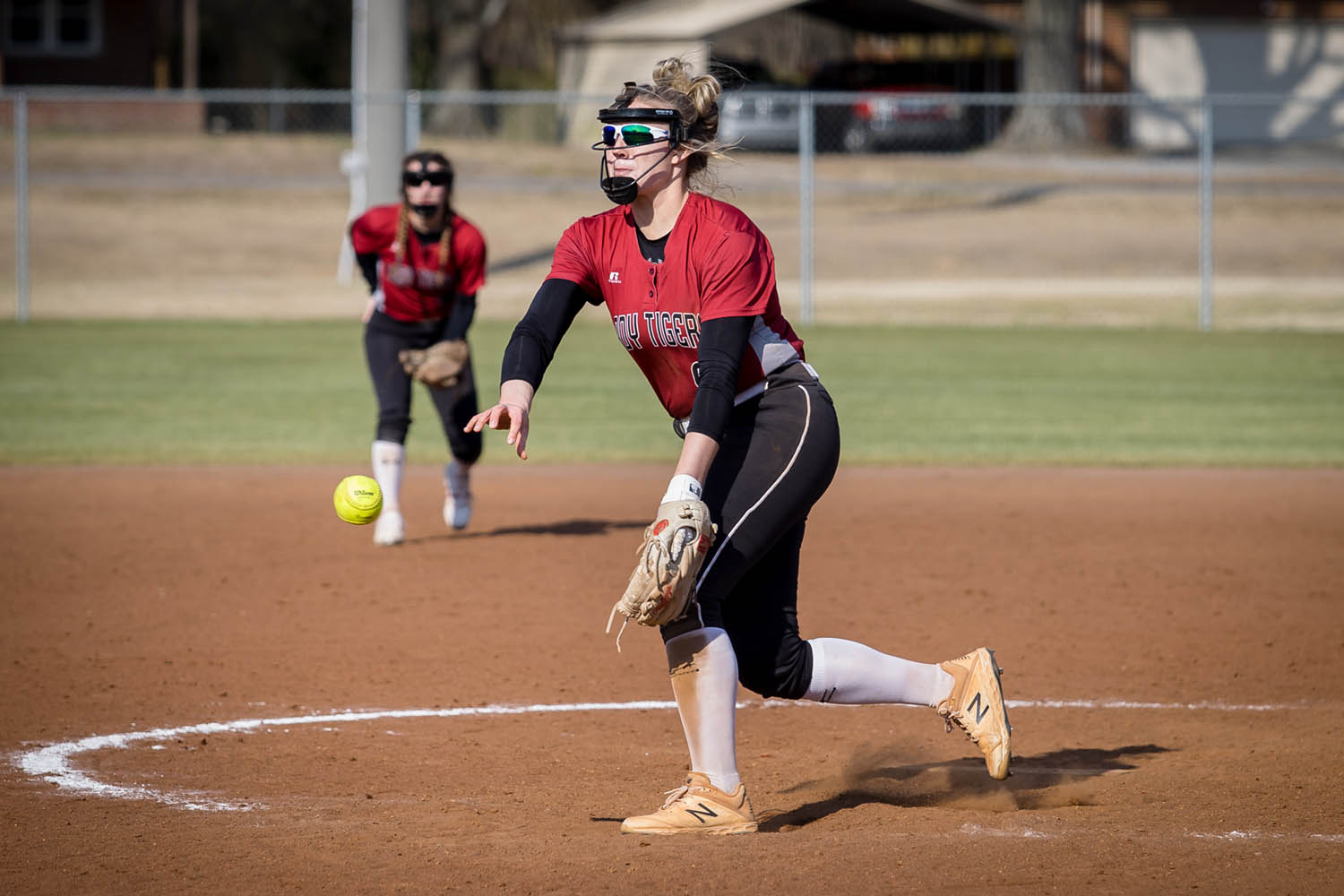 “I was very impressed on how we came out and played, especially offensively, outscoring our opponents 70-7 through five games,” said Reeves. “ I was very pleased with strong pitching performances from Blayne Godfrey, Zoey Crawford, and Karsi Lentz.”

The Lady Tigers made quick work of Arab in their 22-0 win over the Lady Knights. Godfrey pitched a perfect game to pick up the win. She struck out nine and didn’t allow a hit in three innings of work.

Brityan Godfrey and Mary Elizabeth Booth each had a home run and three RBIs in the win. Brooklyn Stiles finished with two hits and four RBIs, while Blayne Godfrey had two hits, two runs, and three RBIs. Hartselle runners stole 11 bases in the win.

Blayne Godfrey pitched her second no-hitter of the day in the Lady Tigers’ 10-0 win over West Morgan. Hartselle scored one in the first and two in the second before putting the game out of reach with six in the third.

Lentz was two-of-five with two home runs and four RBIs to help the Lady Tigers pick up a 15-2 win over the host Lady Senators. Preuitt finished with four hits, including two doubles and a triple, with four runs scored and two RBIs.

Zoey Crawford got the start on the mound. She allowed two runs while striking out 11 in seven innings to get the win.

Preuitt and Lentz combined for 10 RBIs to lead the Lady Tigers to a 16-0 win over Arab in the opening round of bracket play. Preuitt hit two home runs and drove home six, while Lentz had three hits, including two home runs, and drove home four. Jones finished with three runs scored, two RBIs, and a stolen base.

Crawford got the start and pitched the third no-hitter in four games for the Lady Tigers. She pitched four scoreless innings while striking out four.

The Lady Tigers picked up the fifth win of the season in winning the Sparkman Tournament. They defeated the Lady Senators for the second time, 7-5.

Sparkman jumped out to a 1-0 lead after the third inning to take the lead over the Lady Tigers, but it didn’t take long for the Tigers to answer, scoring four in the bottom of the fourth inning.

The Lady Senators tied the game up at 4-4 after scoring three in the top of the fifth; however, Hartselle grabbed the lead back with three in the bottom of the fifth and held on for the victory.

Jones and Katie Gillott each had a hit and two RBIs to lead the Lady Tigers. Blayne Godfrey and Brantley Drake had a hit and an RBI. Preuitt had a hit, a run scored, and two stolen bases.

Blayne Godfrey got the start and went five innings, allowing two hits and four runs with no earned runs while striking out nine to get the win. Lentz pitched the final two innings, allowing a hit and a run to pick up the save.

“I loved the energy from the dugout and how much fun the girls had this whole weekend,” said Reeves. “It was great seeing the results from a tough off-season program we started right after tryouts in August.”