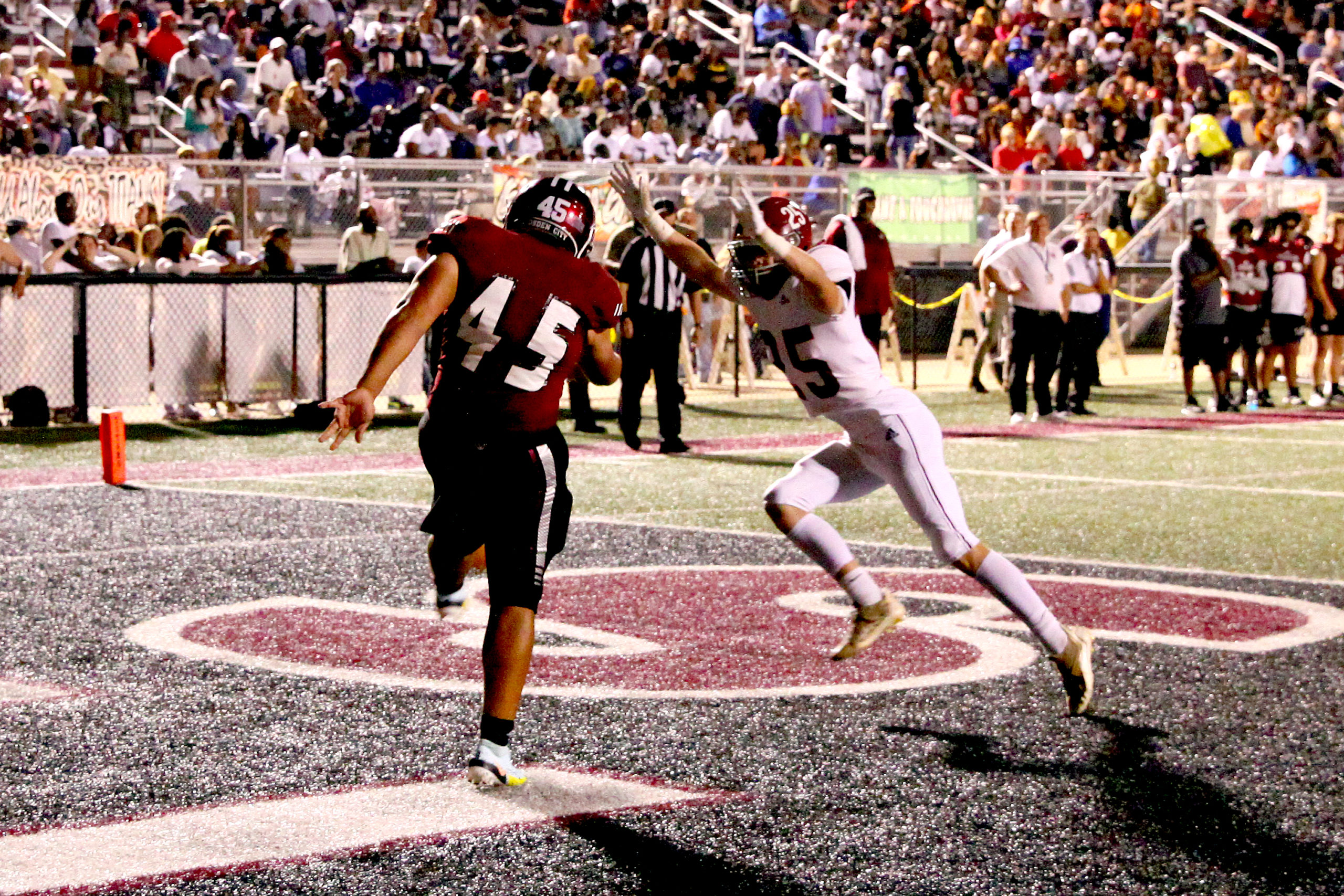 Saban Witt blocks his second Gadsden City punt. This block forced a safety after the Titans recover in their own end zone in Hartselle’s 16-9 win. Photo by Jim Meadows.

GADSDEN CITY – On a night when the Hartselle offense was not playing great, the Tigers’ defense and special times rose to the occasion and shut down the Gadsden City offense in a 16-9 victory at Titan Stadium.

“We needed a game like this one,” said Hartselle head coach Bryan Moore. “On a night when our offense had two red zone turnovers and only 60 yards in the second half, our defense and special teams controlled the game and gave us the win.”

Hartselle fumbled on their first possession when Ri Fletcher had the ball stripped from his hands. The Titans took over inside the Tigers’ 40-yard line but failed to score as the Hartselle defense forced the Titans to turn it over on downs.

After struggling through most of the first half offensively, The Tigers finally broke through early in the second after taking possession of the ball following a Saban Witt blocked punt to close out the first quarter.

Jack Smith hit Eli Tidwell, who took the ball 20 yards to the end zone for his sixth touchdown of the season and a Hartselle 7-0 lead.

The defense forced Gadsden City backward with a couple of tackles for loss and sack, forcing the Titans’ punt attempt. Their punt rolled to his left to try and get some space to kick and Walker Hoyle blocked his punt in the end zone. After a scramble for the ball, the Titans recovered the ball and gave the Tigers a safety and a 9-0 lead.

Following the Gadsden City free kick, the Tigers drove down the field by passing and running the ball. Smith capped off the drive with a six-yard touchdown run giving Hartselle a 16-0 lead with 44.9 seconds left in the half.

The Tigers’ offense was stymied by Gadsden City’s defense in the second half, only managing a little over 60 yards in the half after totaling over 250 in the first half.

The Titans scored on a field goal midway through the third to cut the lead to 16-3.

The teams swapped possessions the rest of the game, with Hartselle picking up a crucial first down with 1:21 left in the game and Gadsden City only having one timeout. The Tigers ran out the clock with two kneel downs to finish the win.

Smith finished the night 13-of-25 passing for 177 yards with a touchdown and an interception. He also led the team in rushing with 61 yards and a touchdown on 14 carries.

Izayah Fletcher had six receptions for 91 yards, while Tidwell had three for 66 yards and a touchdown.

The defense had four sacks and eight tackles for loss to thwart the Titans’ offense.