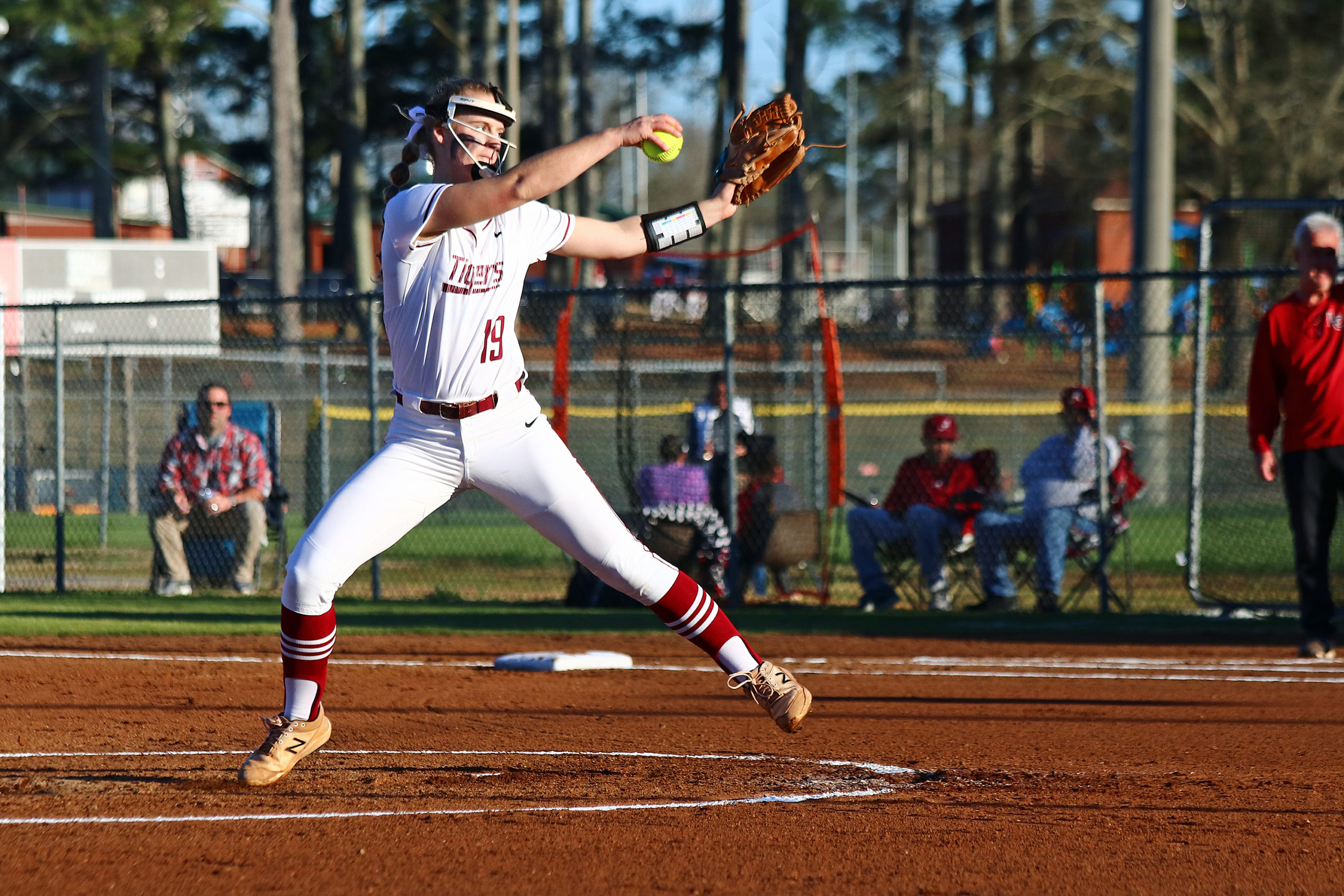 The Hartselle Lady Tigers rolled through seven opponents, outscoring them 59-2, in winning the Alabama Sports Officials Foundation Tournament at Choccolocco Park in Oxford over the weekend.

“It was a long weekend for us, but it was good to come home with the tournament victory,” said Hartselle Coach Christopher Reeves. “We learned a lot about ourselves through the long day Saturday.”

Karsi Lentz, an Auburn University at Montgomery signee, led the Lady Tigers to the tournament title with a dominant performance at the plate. She finished the tournament with 10 hits, including four home runs and three triples, and added 12 RBIs and eight runs scored. After hitting a school-record 17 home runs this past season, she is on pace to break that mark this season, as she has 10 home runs through 14 games. She also picked up two wins in the circle.

Alabama signee Larissa Preuitt showed off her speed and base running skills with 12 runs scored and eight stolen bases. She has 23 stolen bases in 14 games this season.

“Larissa and Karsi had a solid day on the field in leading the Lady Tigers to victory,” said Reeves, “but more importantly they showed tremendous leadership and focus during the long day.”

The Lady Tigers picked up wins over Madison County, Cedar Bluff and Pelham in pool play.

Godfrey got the start and pitched two scoreless innings while striking out four to pick up the win. Zoey Crawford closed out the win with three innings of scoreless ball.

After scoring a run in the first and second innings for a 2-0 lead, Hartselle exploded for 10 runs in the top of the third. Stiles hit a two-run inside-the-park home run, and Lentz landed the big blow with a three-run home run that plated Preuitt and Kaelyn Jones. When the smoke settled, Hartselle had extended the lead to 12-0.

Jones’ double in the top of the fourth plated Preuitt to cap off the scoring.

Hartselle 20, Cedar Bluff 2
The Hartselle girls jumped out to an 8-0 lead in the top of the first and never looked back in their 20-2 win over Cedar Bluff.

Eight of the Lady Tigers’ first nine batters scored in the inning. They added five runs in the second and seven more in the third to seal the victory. Katie Gillott, Brantley Drake and Stiles each scored three runs, while Preuitt, Jones and Mary Elizabeth Booth each scored two runs in the win. Gillott finished with four RBIs. Preuitt had three RBIs, while Jones, Lentz and Stiles each finished with two RBIs.

Lentz pitched two innings in picking up the win. She allowed two runs on one hit.

The Lady Tigers added seven runs in the bottom of the fifth to seal the victory.

Hartselle rolled through bracket play with three more shutouts – over Sand Rock and White Plains and then John Carroll Catholic in the championship game.

Hartselle 10, Sand Rock 0
In the first round of bracket play, Bowling got the start and didn’t disappoint. She pitched three perfect innings in picking up her first victory of the season.

Lentz started the scoring with a three-run home run in the bottom of the first inning, driving home Preuitt and Jones. Then Savannah Barber, running for the catcher, scored on Sand Rock’s error on a Brylie Singleton grounder to put Hartselle up 4-0 in the first inning.

Booth’s single in the bottom of the second plated Preuitt for a 5-0 lead. Two batters later, Aly Putnam’s single to right plated Lentz and Booth to put the Lady Tigers up 7-0.

They added three more runs in the bottom of the third with runs by Alanna Evans, Preuitt and Jones.

Hartselle 3, White Plains 0
The Lady Tigers found themselves in a pitchers’ duel in their game with White Plains. The Lady Wildcats entered the game 10-2.

Godfrey pitched a four-inning shutout, allowing one hit while striking out 10 for her second win of the weekend.

Hartselle 4, John Carroll Catholic 0
The Lady Tigers jumped on the Lady Cavaliers with two runs in the first inning. After a bunt single by Preuitt, Jones tripled to drive in Preuitt, putting Hartselle up 1-0.

Lentz followed with a double to score Jones and extend the lead to 2-0. Lentz capped off the scoring for the Lady Tigers with a two-run home run in the bottom of the fifth.

Godfrey pitched six scoreless innings and struck out 12 in getting her third tournament win.

Hartselle 2, Brookwood 0
In the championship game, the Lady Tigers had a matchup with Coach Reeves’ former team, the Brookwood Lady Panthers. Hartselle came out on top by a score of 2-0 to win the ASOF Tournament Championship in a game shortened due to time.

Preuitt led off the game with a double and then went to third on a wild pitch to give the Lady Tigers the first scoring threat of the game. Jones followed up with a single up the middle to plate Preuitt and give Hartselle a 1-0 lead. Jones stole second to give the Lady Tigers another runner in scoring position with Hartselle’s hottest hitter, Lentz at the plate. She reached on an error by the shortstop and Jones advanced to third. Jones scored on a Brityan Godfrey fielder’s choice to make the score 2-0 and give the Lady Tigers all the runs they would need.

Blayne Godfrey shut the door on the Lady Panthers with four scoreless innings while striking out six and allowing three runs.