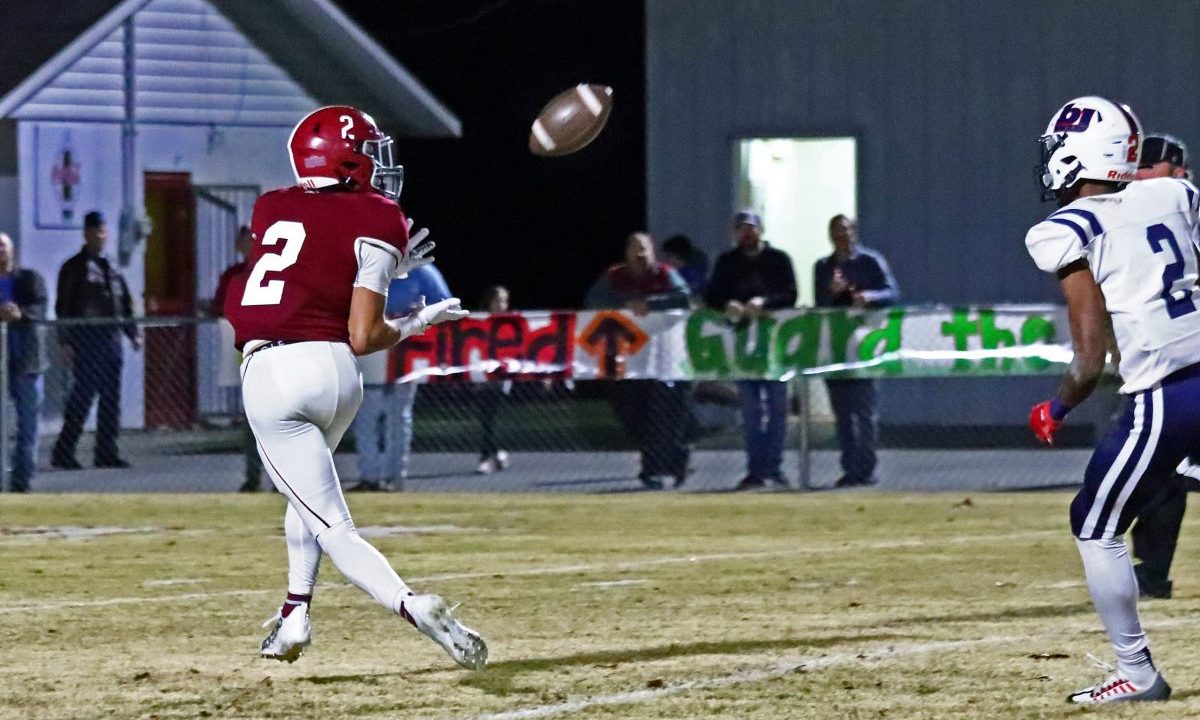 Izayah Fletcher catches the first of two touchdown catches in the first quarter of the Tigers’ 38-31 win over Bob Jones. Photo by Jim Meadows.

HARTSELLE – The Hartselle Tigers completed another perfect regular season following their 38-31 win over 7A Bob Jones this past Friday.

This was the sixth time in school history that the Tigers have had a perfect season. Three of those seasons have come since 2018.

The Tigers jumped out to an early 21-0 lead on the arm and legs of quarterback Jack Smith.

Smith put Hartselle on the board first with 7:36 left in the first on a 37-yard run through the middle of the Bob Jones defense.

A little over two minutes later, Smith connected with Izayah Fletcher for a 56-yard touchdown pass to take a 14-0 lead. The duo combined again for a 50-yard score with less than a minute remaining to take a 21-0 lead.

Bob Jones got on the scoreboard when quarterback Rayshawn Hardy scored on a 49-yard run with 10:07 left in the second quarter. The Patriots added a 30-yard field goal just before halftime to cut the Hartselle lead to 21-10.

Ri Fletcher extended the Tigers’ lead to 28-10 just 13 seconds into the second half with a 67-yard run through the middle of the Patriots’ defense.

Hartselle recovered the Bob Jones on-sides kick attempt and ran out the clock to secure their 10th victory.

Smith finished 6-of-10 for 148 yards and two touchdowns while rushing for 69 yards and a touchdown on seven carries.

“It was good to get Izayah some looks tonight,” Hartselle head coach Bryan Moore said. “We could have continued to go back to him, but the game turned into one where we needed to use our running game to run the clock.”

“Tonight was a historic night for our program,” Moore said. “To complete another perfect regular season and to extend our regular-season win streak to 23 games shows a lot about the character of the guys in the locker room.”