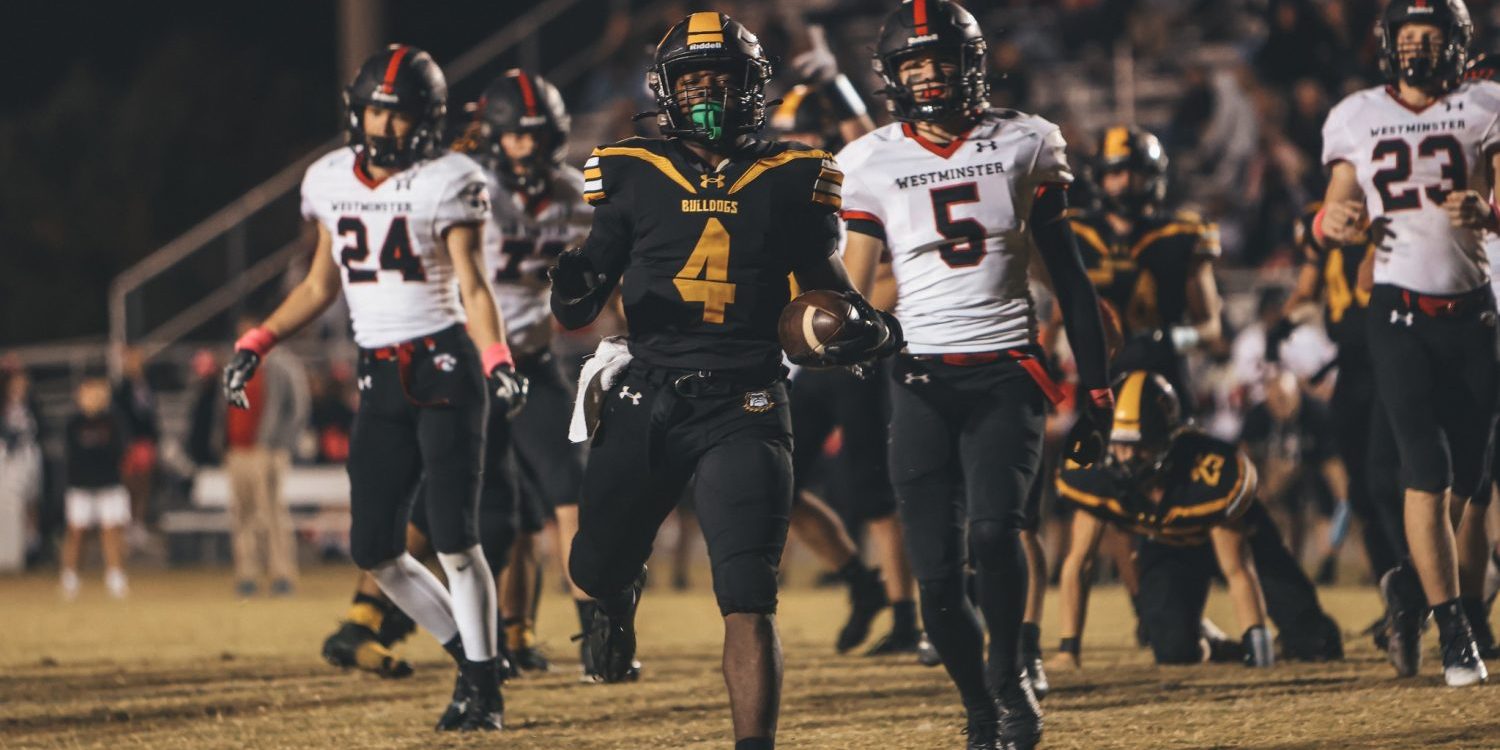 Jaylen Moseley runs for one of his four touchdowns in Priceville’s record-setting 72-45 win over Westminster Christian. Special to the Enquirer/Shawna Oliver.

PRICEVILLE – The Priceville Bulldogs secured a chance for the 4A, Region 8 championship on Friday with a record-setting performance this past Friday. The Bulldogs ran past Westminster Christian 72-45 to continue their best start in program history.

Westminster jumped out to a 14-0 lead early in the first quarter, but Priceville didn’t flinch. The Bulldogs got a two-yard touchdown from Mason Cartee and a two-point conversion to cut the lead to 14-8. Jaylen Mosely scored on a 53-yard run late in the quarter and following a successful two-point conversion, the Bulldogs took a 16-14 lead.

Westminster took a 17-16 lead early in the second with a field goal and then extended the lead to 25-16 with an 8-yard touchdown run. Priceville cut the lead to 25-22 going into halftime with a five-yard run by Cartee.

Blitz Clemons gave Priceville a 29-25 lead with a 20-yard touchdown run to open the second half. Westminster retook the lead, 32-29, with a 67-yard scramble by quarterback Brandon Musch.

Priceville responded with a 65-yard run from Mosely to take back the lead, 37-32. However, Westminster’s Musch scored on a two-yard run to make the score 38-37 midway through the third quarter.

Priceville added three more touchdowns over the next seven minutes to take a 64-38 lead with 10:25 left in the game. Touchdown runs by Clemons (31 yards) and Mosely (nine yards), along with a 29-yard touchdown pass by Jackson Prickett to Xander Gaines, extended the lead.

Westminster scored their final touchdown of the game with a 15-yard touchdown pass by Musch with 7:17 remaining.

The Bulldogs finished with 610 yards of total offense, rushing for 490 and passing for 120. The 610 yards is a season-high, eclipsing the 532 yards versus Fairview.

Mosely led Priceville with 173 rushing yards and four touchdowns on five carries. Cartee added 146 yards and three touchdowns, while Clemons rushed for 138 yards and two scores. Prickett finished 3-of-3 passes for 120 yards and a touchdown, all to Gaines.

It is the first time in school history that the Bulldogs have had three 100-yard rushers and a 100-yard receiver.