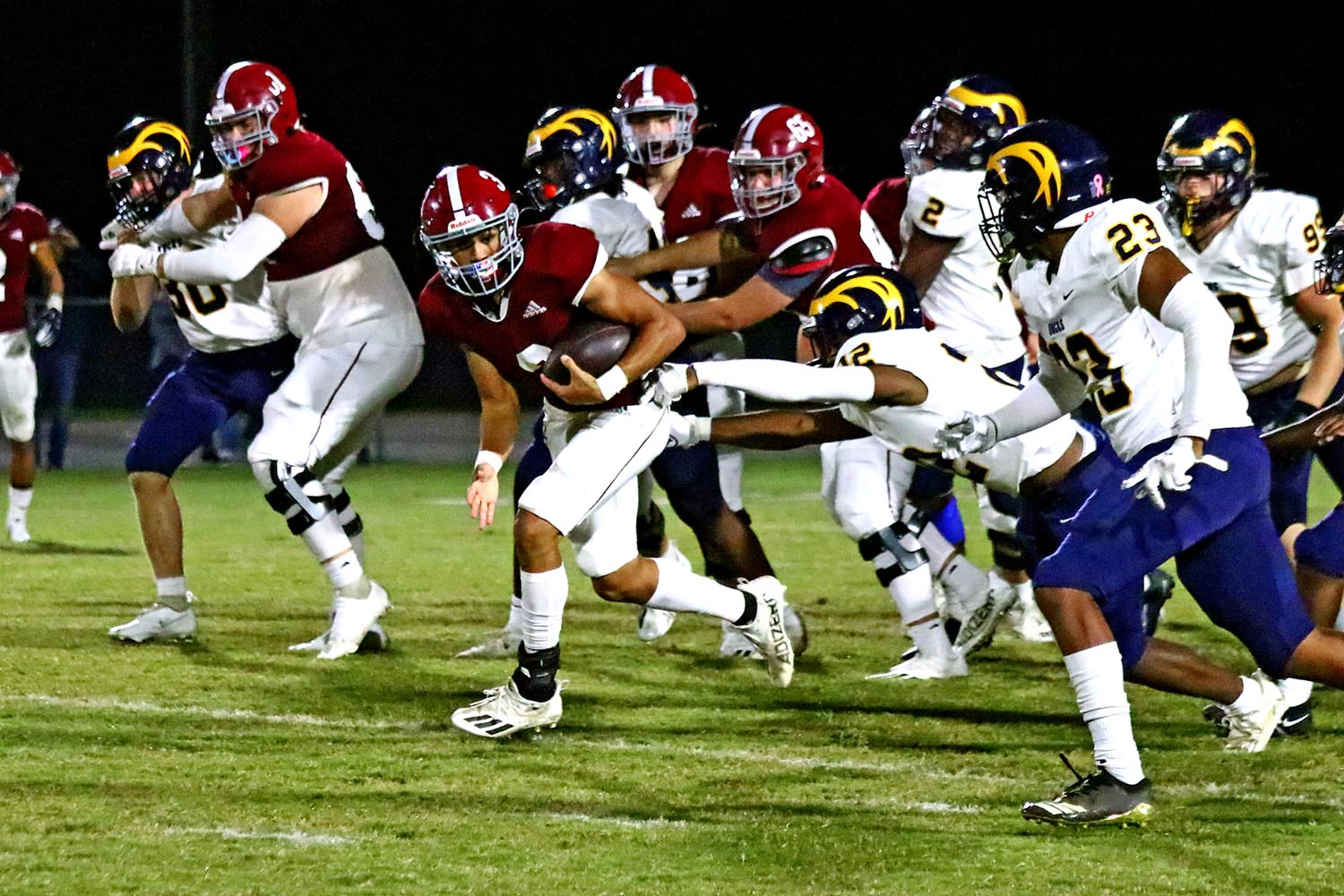 In the second half of the season, Ri Fletcher continued his spectacular play with a 314-yard and six touchdowns rushing effort this past Friday to lead the Tigers to a 65-20 win over Buckhorn.

The win secured an undefeated regular season for Hartselle – the Tigers’ first since 2018 when they finished 11-1.

“An undefeated season is special,” said Hartselle Coach Bryan Moore. “It is not easy to finish undefeated, and I am proud of our seniors and team for finishing undefeated.”

Fletcher gave the Tigers the lead with a 20-yard touchdown run with 6:51 left in the first quarter. The seven-play, 48-yard drive took 2:31 to complete.

Hartselle’s next drive was three plays for 64 yards and was capped off by an Armdheo Dunigan one-yard touchdown run. Dunigan started the drive with a 41-yard run, and then JT Blackwood connected with Eli Tidwell for a 27-yard pass play to set up the touchdown run.

Buckhorn cut the lead to 14-7, scoring on a 26-yard touchdown pass with 2:09 remaining in the quarter.

It didn’t take the Tigers long to get back on the board. Blackwood and Tidwell hooked up for a 36-yard touchdown pass to give Hartselle a 21-7 lead. Dunigan had a 34-yard kick-off return to set up the score.

The Tigers got the ball back when Coleman Mizell intercepted a Buckhorn pass and returned it to the Bucks’ 31-yard line.

Fletcher scored on the next play with a 31-yard run eight seconds later to extend the lead to 28-7.

The Bucks cut the lead to 28-14 when they scored on a touchdown pass with 9:24 left in the second quarter.

The Tigers’ next drive took four plays, two of which were penalties, and covered 80 yards in 33 seconds. R. Fletcher had a 32-yard run to set up a Blackwood-to-Izayah Fletcher 38-yard touchdown pass with 8:51 left in the half to give Hartselle a 35-14 lead.

Ri Fletcher scored his third touchdown on a 47-yard run with 4:37 left in the first half to extend the lead to 42-20.

DJ Bishop intercepted a Buckhorn pass that bounced off a Bucks’ receiver’s hand to give the ball back to the Tigers with 2:59 left in the half.

However, the Bucks picked off a Blackwood pass intended for Tidwell at the Buckhorn one-yard line.

Jake England sacked the Bucks’ quarterback on the next play to give the Tigers a 44-20 lead with 1:42 left in the half.

Ri Fletcher capped off the first-half scoring with his fourth touchdown on an 18-yard run with 29.2 seconds left in the half to give the Tigers a 51-20 halftime lead.

Hartselle opened the second half with an R. Fletcher 66-yard touchdown run to take a 58-20 lead with 11:31 left. The touchdown was R. Fletcher’s fifth of the game.

Bishop got his second interception on the Bucks’ next drive to give the ball back to the Tigers. However, their drive ended with a turnover on downs with 6:18 left in the third quarter.

The Hartselle defense forced Buckhorn into a three-and-out to get the ball back after a 30-yard Bucks’ punt. The Tigers capitalized on the possession with a seven-play, 66-yard drive that ended with R. Fletcher’s sixth touchdown on a 25-yard run to give the Tigers their final points and a 65-20 win.

The Tigers finished with 643 yards of offense – their most yards of the season. They had 423 yards rushing and 220 yards passing.

“We have been really good on offense this season,” said Moore. “This is the most balanced team I have ever been around.”

Ri Fletcher had 314 yards and six touchdowns on 16 attempts. The rushing yards and touchdowns are career-highs.

“I surprised myself with my performance tonight,” said R. Fletcher. “I couldn’t have done this without my offensive line.”

Moore said he was proud of his offensive line, opening up run lanes and helping the Tigers to 423 yards rushing.

“Ri has gotten better and better each week after coming back from his injury to start the season,” said Moore. “The Muscle Shoals game was his coming-out party, and his performance tonight was even better.”

Sage Smothers had 52 yards on nine attempts, and Dunigan had 42 yards and one touchdown on two carries.

Blackwood was 14 of 25 for 220 yards with two touchdowns and an interception.

The Tigers (10-0) will now await their first-round opponent, which will be determined Friday night. A three-way tie in 6A Region 6 between Jackson-Olin, Pinson Valley, and Gardendale will be broken following the outcome of their games.