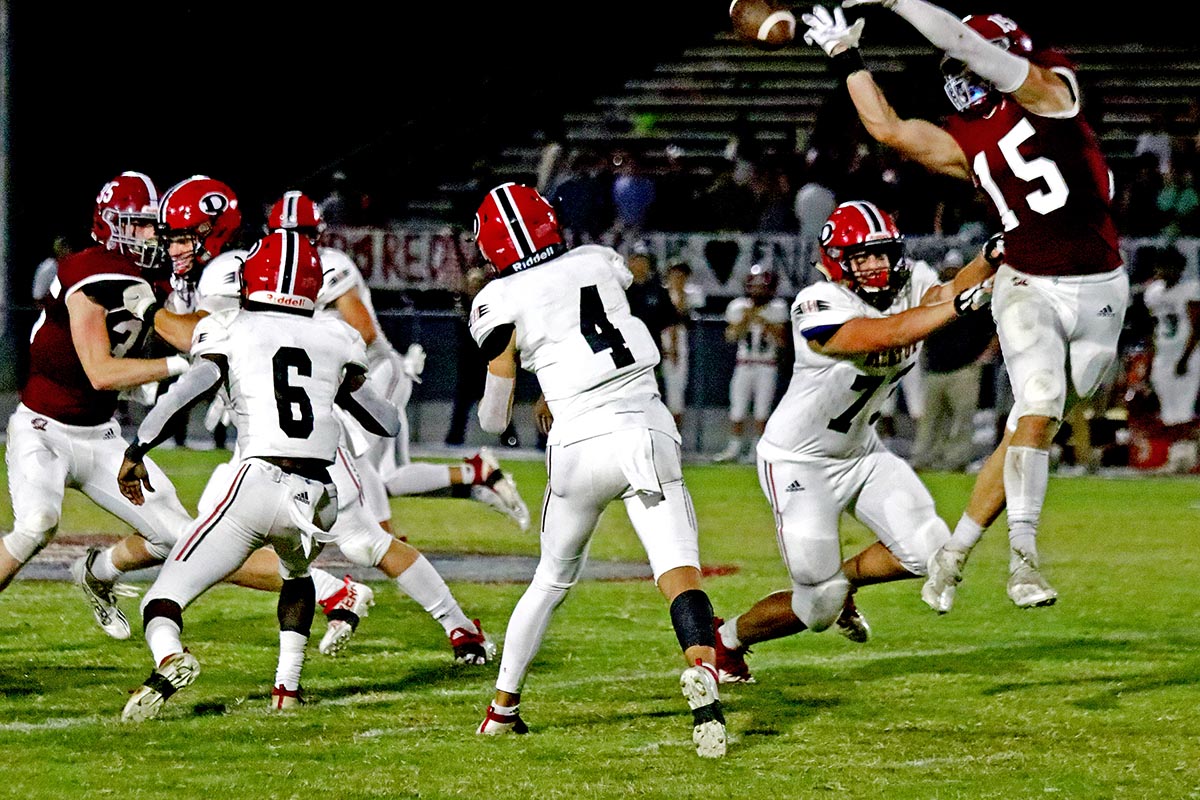 Friday, the Hartselle Tigers extended their season-opening win streak to four games with a 42-21 victory over rival Decatur at JP Cain Stadium.

The win was the fourth consecutive in the series for the Tigers. The last time Hartselle won four in a row over Decatur was 1978-81.

The Tigers, who entered the game ranked No. 6 in 6A, dominated defensively for much of the game.

“I thought our defensive plan by Coach Pell and Cole was really good,” said Coach Bryan Moore. “Our defense played well for much of the game, including the four interceptions we came up with.”

Hartselle held the Red Raiders to 66 yards in the first half and intercepted two Ellis Dickman passes.

The first interception – by Jake England, with 8:49 remaining in the second quarter – followed a Decatur interception of JT Blackwood. The Tigers took advantage of the Red Raider turnover and scored with 2:56 left in the half.

Armadheo Dunigan scored the first of his two touchdowns on a one-yard run to give Hartselle a 14-0 lead.

On the next Decatur drive, Coleman Mizell leaped in the air to deflect a Dickman pass that ended up in the arms of Peyton Steele.

The Red Raiders opened the second half with a nine-play, 78-yard drive capped off by a Banks Dement one-yard touchdown run. The score cut the Tigers’ lead to 14-7 with 8:38 remaining in the third quarter.

Hartselle answered the Decatur scoring drive with a 12-play, 59-yard scoring drive to push the lead to 21-7. Dunigan scored his second touchdown with a three-yard run.

The Hartselle defense forced the third Decatur turnover of the game when Mizell picked off Dickman at the Red Raider 49-yard line. Mizell returned it for a touchdown with 2:50 left in the third quarter. The score pushed the lead to 27-7.

Decatur cut into the lead on the next possession with a 14-play, 71-yard scoring drive. Ryan Kirk scored on a three-yard run with 9:34 remaining to make the score 27-14.

The Red Raiders, who forced the Tigers to a three-and-out on their next possession, cut the lead to 27-21 with a four-play, 65-yard scoring drive that took 44 seconds off the clock.

The Tigers responded with a seven-play, 80-yard scoring drive capped off by a four-yard touchdown run by Blackwood with 4:10 remaining. The drive’s big play was a Blackwood-to-Jack Smith catch-and-run for 50 yards, giving Hartselle the ball inside the Decatur 15 yard line.

The score pushed the lead to 35-21 after the two-point conversion.

“Jack Smith was huge on the drive,” said Moore. “He made two huge plays to put us in position to score.”

Hartselle capped the scoring with 56.6 seconds remaining to extend the lead to 42-21. Blackwood hit Eli Tidwell across the middle for an 18-yard touchdown pass.

The Tigers’ Jake Haynes ended the next Decatur drive with Hartselle’s fourth interception of Dickman. Hartselle ran out the remaining 38 seconds on the clock to end the game.

“I am proud to be 4-0 after wins over Austin, Cullman, and Decatur to start the season,” said Moore.

Blackwood finished the game 19-of-27 for 222 yards with a touchdown and an interception. He also had 49 yards rushing and a touchdown on 11 carries.

He has thrown for 972 yards through four games with eight touchdowns, completing 73 percent of his passes.

Dunigan had 71 yards and two touchdowns on 22 carries, along with one reception for 22 yards. Ri Fletcher finished with 41 yards and a touchdown on eight carries.