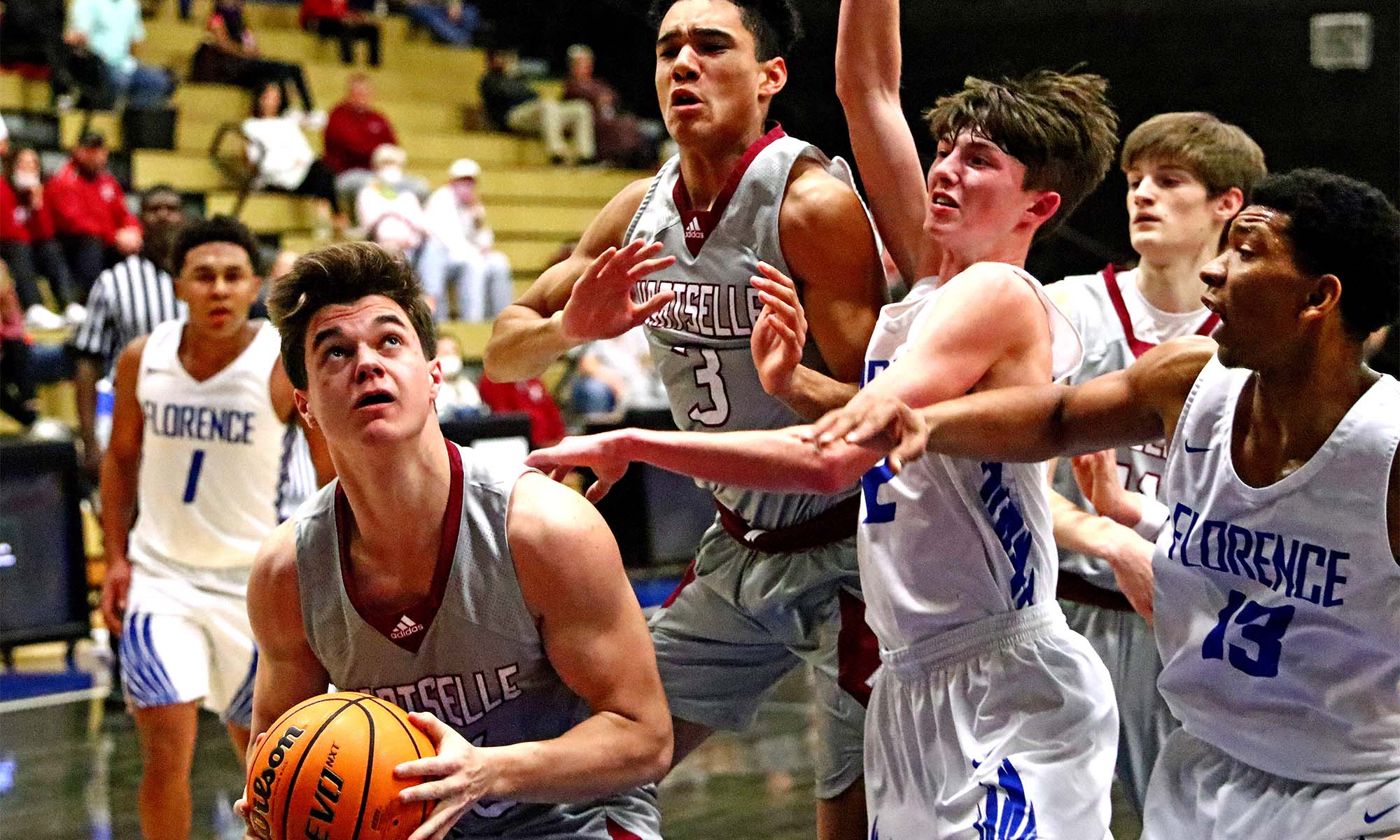 The 12-game win streak of the Hartselle Tigers ended with an 88-77 loss in overtime to Florence.

Florence opened the game on a 5-0 run. The Tigers answered with an 8-0 run that was started by Brody Peebles’ free throws courtesy of a Falcons’ technical foul. Peebles added four more points in the run to help Hartselle take an 8-5 lead. The Falcons went on an 8-2 run in a little more than a minute to take a 13-10 lead. Peebles and Trent Wright combined for the next five points to give the Tigers a 15-13 lead. Florence answered with eight straight points to take a 21-15 lead. Peebles and Wright scored the quarter’s final six points to tie the game at 21-21. Peebles finished with 15 points for Hartselle.

The Tigers opened the second quarter with an 8-3 run to take a 29-24 lead. Peebles opened the run with a layup and a free throw while Luke Ward closed out the run with five points, including a three-pointer. Florence responded with a 9-3 run to take a 33-32 lead. After a Peebles basket, Elijah Kellick took a pass on the baseline and slammed it home to give Hartselle a 36-33 lead. The Falcons finished the quarter on a 4-0 run to grab a 37-36 lead at halftime.

Florence opened the third quarter on a 12-4 run to extend their lead to 49-40, their largest of the game. The Tigers responded with a 12-5 run to close the gap to 54-52 to end the third quarter. Peebles had six points to lead the Tigers’ run. Kiah Key, Coleman Mizell, and Wright each added points to get Hartselle back in the game.

A Peebles three-pointer to open the fourth quarter gave the Tigers their first lead, 55-54, since late in the second quarter. The Falcons responded with a 10-5 run over the next five minutes to grab a 64-60 lead and for a Hartselle timeout with 2:38 left. Dunn hit a three-pointer out of the timeout and then Key pulled down a rebound and quickly drove to the other end of the floor for a layup to give the Tigers a 65-64 lead.

The Falcons retook the lead at 66-65 with two free throws with 1:01 left. The Tigers were forced to foul following three consecutive empty possessions, but the Falcons could take advantage as they went 3-of-6 at the line. Florence took a timeout with 10.3 seconds left and leading by three, 68-65. The Tigers quickly inbounded the ball to Dunn, who turned and quickly drove down court to the basket for a layup. He was fouled on the play and converted the free throw to tie the game at 68-68. Following a desperation heave from the Falcons that missed the mark, the two teams headed to overtime.

Jeffrey Watson finished with 26 points, including 12 in overtime to lead Florence (10-11). Darian Joplin had 19 points, while Malik Hawkins had 10 points.