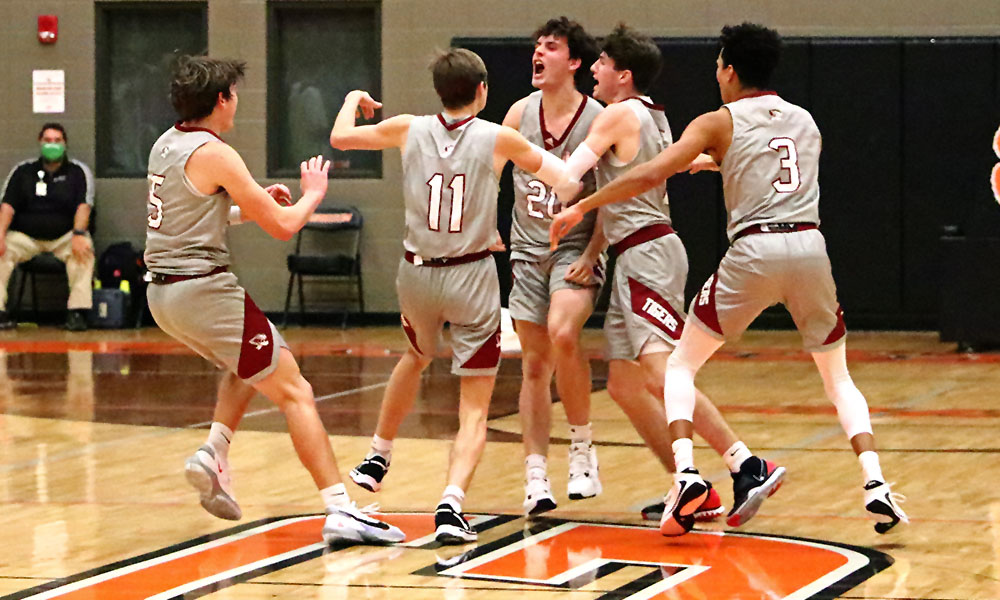 The Tigers found a way to get the win Friday night on the road at Grissom.

Trailing 61-59 with under 10 seconds to go, Trent Wright drove the left side of the floor to the basket for a shot to win the game, and it went long, and in the fight for the rebound, Kiah Key tipped the ball out to a wide-open Luke Ward with 2.5 seconds remaining.

“The ball bounced out to me, and I let it go without hesitating,” said Ward. “It felt perfect coming off my hands.”

Hartselle (11-1) pulled off the dramatic victory despite trailing 51-46 to start the fourth quarter. The Tigers outscored Grissom 16-10 in the final quarter.

“We came out a little flat tonight, and Grissom took advantage of it to keep the game close,” Hartselle coach Faron Key said. “We did a lot of the little things that allowed us to stay in the game and ultimately head home with the victory.”

The home-standing Tigers extended the lead to seven midway through the second quarter before Hartselle went on a 7-0 run to tie the game at 24-24.

Grissom’s  Izzy Miles answered the Hartselle run with four straight points to grab the lead at 28-24. The Tigers closed the quarter on an 11-4 run to take a 35-32 lead into halftime.

Hartselle extended the lead to 39-32 less than a minute into the third quarter. Grissom went on a 7-0 run to tie the game at 39-39. The teams swapped baskets over the next couple of minutes, with Hartselle holding on to a 46-43 lead. Grissom closed the third quarter on an 8-0 run to take a 51-46 lead into the final quarter.

The visiting Tigers opened the fourth quarter with a 4-0 run to get within one at 51-50. A 4-1 Grissom run extended their lead to 55-51 midway through the fourth. A Brody Peebles 6-0 run gave Hartselle a 57-55 lead, their first since late in the third quarter. After trading baskets, Hartselle held on to a 59-57 lead with a minute to go.

Grissom tied the game at 59-59 on a James Sheffield basket. They took the lead on two RJ Johnson free throws with 23 seconds remaining.

The Tigers set up the last-second heroics by Ward by fighting to the final horn and not giving up.

Hartselle was led by Peebles’ game-high 30 points and Ward, who added 10.