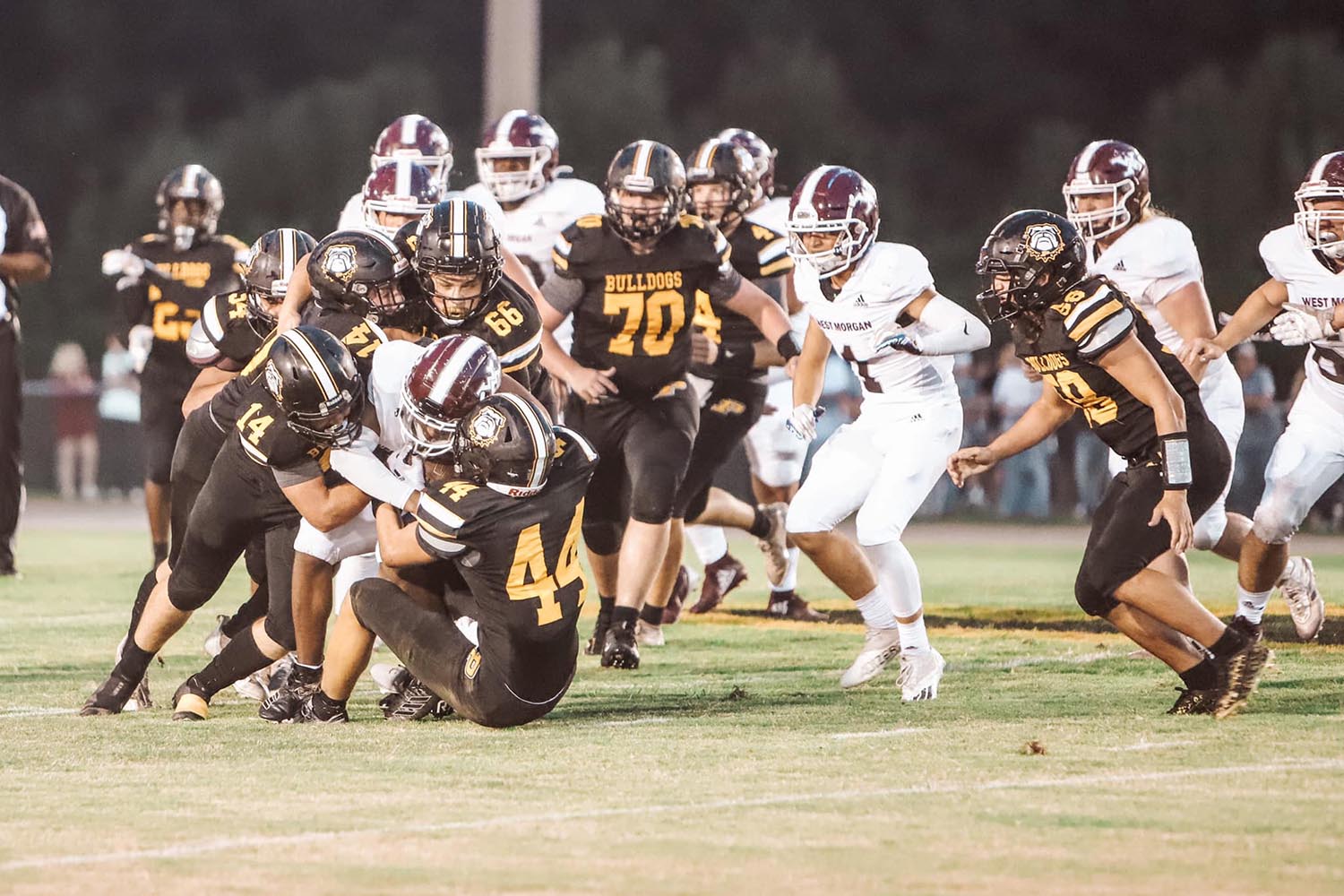 It was a battle between county rivals and region foes when West Morgan visited Priceville on Friday. The Bulldogs were looking for some revenge after the Rebels won a defensive struggle last season 7-3.

The Priceville defense held West Morgan, who entered the game averaging 41 points per game, to a season-low seven points. The Bulldogs held the Rebels to 16 yards on 12 plays in the first half, a 1.33 yards per play average.

The Bulldog defense didn’t give up a first down until the 9:16 mark of the fourth quarter and held the West Morgan offense scoreless for over three and a half quarters.

The Priceville offense controlled the first half, but miscues kept the Bulldogs off the scoreboard. Priceville lost two early fumbles but saw its defense keep the game scoreless despite having their backs against the wall.

Following a fourth-down stop at the 49-yard line, the Bulldog’s offense quickly marched downfield with a nine-play, 51-yard scoring drive capped off by a three-yard Mason Cartee rushing touchdown with 9:25 left. The score gave the Bulldogs a 7-0 lead.

Priceville extended the lead to 10-0 in the third quarter with a 26-yard field goal by Cody Kennedy. The Bulldogs drive took over six minutes.

Cartee scored his second touchdown of the night when he scampered in from seven yards out to push the lead to 17-0 with 11:26 remaining in the game. The drive’s highlight was a 28-yard pass from Jackson Prickett to Kennedy to set up the score.

Priceville’s two-time all-state offensive tackle Tyler Cappi, who also is starring on the defensive line, capped the scoring for the Bulldogs when he intercepted a Cameron Scheiber pass and took it 39 yards to the endzone to give Priceville a 24-0 lead. The interception was set up by Jake Langlois, who hit the arm of the West Morgan quarterback to force the errant pass.

The Rebels finally got on the scoreboard with 5:09 left when Braxton Peters connected with Kaden Cook on a 15-yard touchdown pass to make the score 24-7.

Priceville’s defense held the Rebels to 73 total yards, while the offense gained 298 yards, including 258 on the ground.

Cartee finished with 156 yards on 34 carries with two touchdowns, while Xander Gaines had 102 yards on 11 carries. Cartee has 392 yards and seven touchdowns on 49 carries through the first two games of the season. He is averaging 8.0 yards a carry.

The Bulldogs defense has allowed only 122 yards through the first two games, giving up only four yards rushing and 118 yards passing.

The competition will toughen up for Priceville (2-0) as they travel to Brooks (3-0) Friday night. The Lions are averaging over 30 points a game while allowing only 11.7.