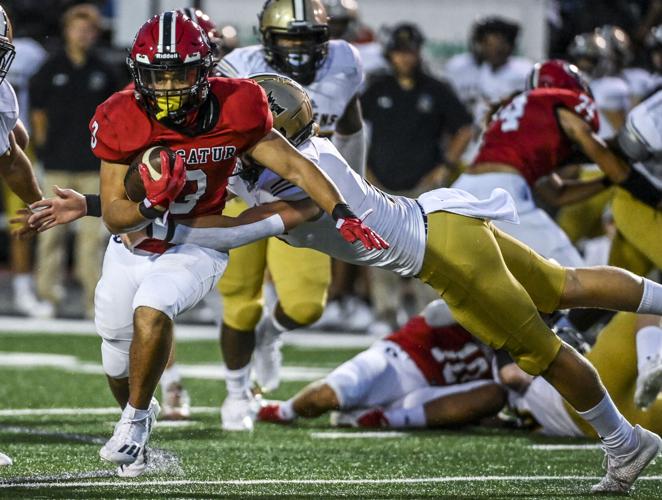 “We didn’t practice well all week,” Adcock said. “It showed tonight because we made a lot of mistakes that we haven’t made in our first two games.”

The hangover got a slap in the face when Athens scored on the first play of the game on a 65-yard run by Jay’shon Ridgle.

“That was a busted play. It was a good wake-up call,” Dupper said.

The Decatur defense did not give up another point to the visitors from Athens. The Golden Eagles’ offense never really got close to the end zone again.

Athens’ other touchdown came on a blocked punt that was returned for a touchdown with 2:26 to play.

The Golden Eagles got the ball back with 1:50 to play, but an interception by Jackson Thatch with 1:37 left sealed the victory for Decatur.

“Sometimes you have to win an ugly game,” Adcock said. “We played about like I expected. There were a lot of things we didn’t do well, but we found a way to win. That’s what’s important.”

The Decatur offense had to fight through a rash of injuries to key players. Running back Ryan Kirk went out on the first Red Raider offensive drive. He had carried the ball five times for 25 yards, but suffered an ankle injury on a three-yard carry to the Athens 2.

Josh Turner took over and scored on the next play. Turner also scored on a six-yard run in the fourth quarter.

It was Dayton Swoopes who got the bulk of the carries after Kirk went down. The junior had 25 carries for 122 yards.

“It’s always next man up and Dayton did a great job of making some tough yardage tonight,” Decatur quarterback Ellis Dickman said.

Dickman lost his favorite receiver Jayden Brown in the second half to a leg injury. He turned to fellow senior Jack Waller for the biggest pass play of the night. It was a 32-yard touchdown pass play where Waller caught a quick strike and raced into the end zone.

The touchdown was at the end of Decatur’s first possession of the second half. It covered 93 yards in 15 plays. It also took 5:15 off the clock. It put Decatur up 19-7.

“We want to score on our first possession in the first half and in the second half,” Dickman said. “We did both of those tonight. That’s big for momentum.”

Decatur junior kicker Roberto Toto had a big night with two 27-yard field goals in the first half.

Both Decatur (3-0) and Athens (1-2) are back in region play next Friday. Decatur travels to Cullman. Athens hosts Muscle Shoals.