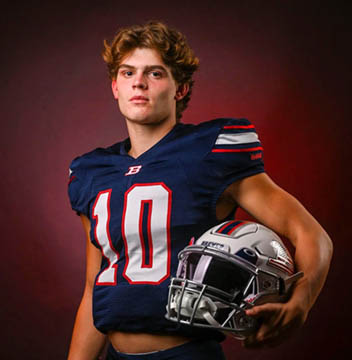 There seems to be a lot of enthusiasm surrounding Brewer High football going into this season.

It starts with head coach Matt Plunkett, who is starting his second season leading the Patriots.

“The kids understand what I’m about and what my expectations are,” Plunkett said. “We’re ready to take a step forward.”

A 35-6 win two weeks later over Lawrence County in the season finale allowed the Patriots to close out the season on a winning note for the first time since 2016.

“The momentum from how we finished the season definitely carried over into the spring and through the summer,” Plunkett said. “I could see it in the hallways at school. The student body is excited about this season.”

The early part of the schedule works in Brewer’s favor, too. The Patriots open with three home games vs. Hanceville, Arab and Ardmore.

“At first we really didn’t like the schedule with three home games at the start,” Plunkett said. “The more you think about it, this may be what we need right now. It’s something to build on.”

Topping it all off is the return of starting quarterback Caden Childers for his senior season. He’s joined by some other talented playmakers on offense who add to the excitement.

“It’s important for my senior class to lead the way in changing the culture of Brewer football,” Childers said. “We’re excited about what’s ahead.”

Childers was a Daily All-Area selection last season after throwing for 1,647 yards and 11 touchdowns. He also rushed for 338 yards and six more touchdowns.

“I feel like we can take our offense to the next level this season,” Childers said. “Last year it took a while to get comfortable with it. When it started clicking late in the season, it was a lot of fun. I can’t wait to see what we can do with it this year.”

Part of the adjustment to the new offense was understanding the speed of the game. Plunkett likes a high-tempo offense. There’s not much time to think about what to do. It’s more about knowing how to react.

Four of the big weapons on offense for Brewer are receivers DJ Burney and Walker Latham along with running backs Lukas Simpson and Austyn Holmes.

“DJ is superfast. Walker can always find a way to get open,” Childers said. “Lukas and Austyn are both special running backs.

“It’s going to be difficult for the defenses to cover everyone. It’s up to me to get the ball to the right person at the right time.”

Besides the ability to direct the offense, Childers brings the intangible of leadership that his head coach values highly.

“He’s an extremely impressive leader,” Plunkett said. “Guys look up to him. He’s the type of leader that can make everyone around him better.”