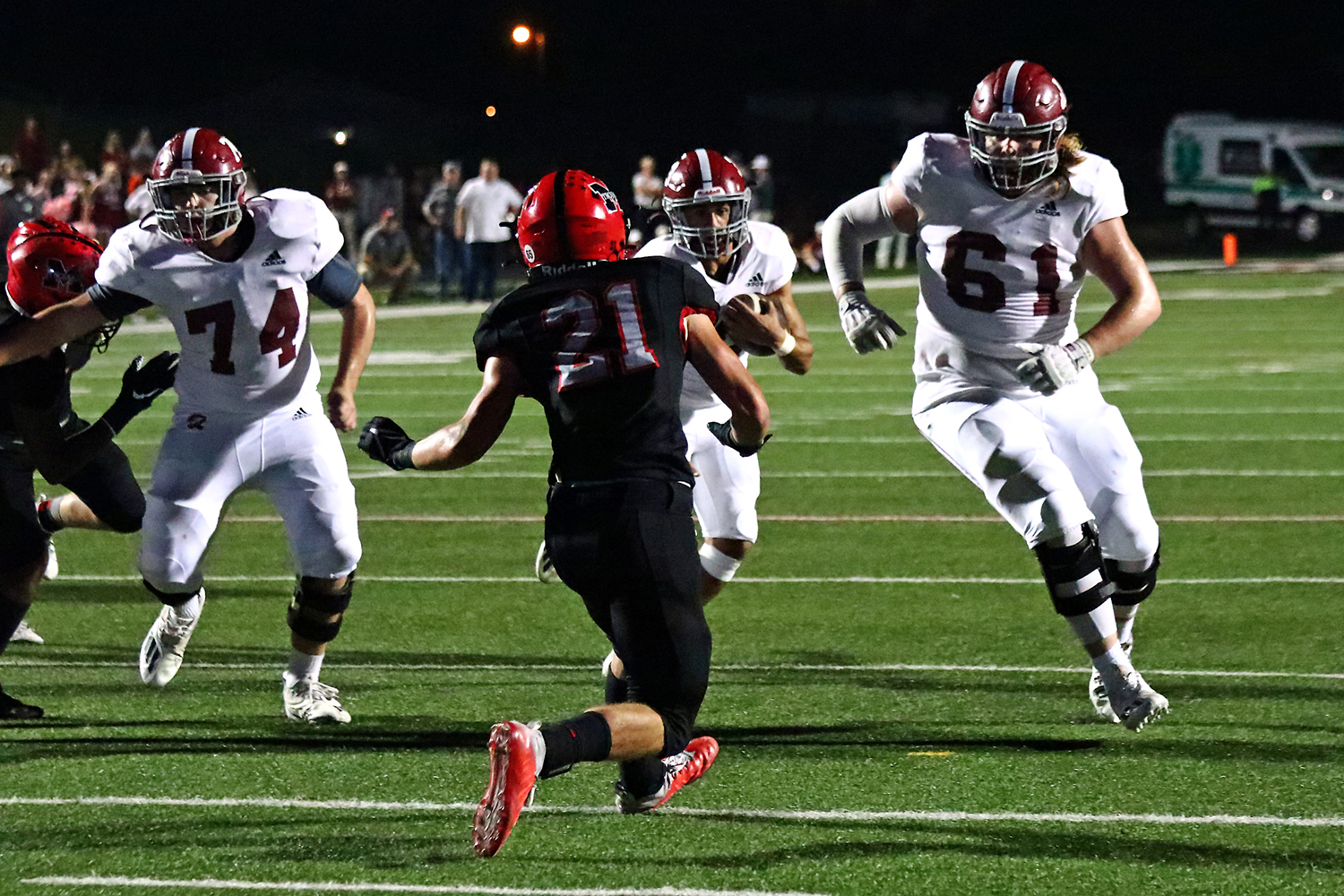 Ri Fletcher put on a show in the second half for the third consecutive game, leading the 6A No. 3 Tigers to a 52-35 region win over Muscle Shoals Friday.

The win gives Hartselle a one-game advantage over the Trojans in the race for the top spot in Class 6A Region 8.

Fletcher finished with 220 yards rushing and four touchdowns on 12 carries. In addition, he had two receptions for 22 yards and a touchdown. Each of his four rushing touchdowns came in the second half.

“This was probably the best performance of my career,” said Fletcher. “I told myself that when I returned from my ankle injury, I was going to show everyone an injury was not going to slow me down.”

The first half consisted of six total possessions, three by each team. It was an offensive first half, with each team scoring on each of their possessions.

Muscle Shoals took an early 7-0 lead with a nine-play, 58-yard scoring drive. The Tigers answered with a seven-play, 69-yard drive to tie the game at 7-7. The big play was a 43-yard touchdown pass from JT Blackwood to Izayah Fletcher.

The Trojans responded with a 15-play, 65-yard scoring drive that took the rest of the first quarter. Their score came on a fumble recovery in the endzone for a 14-7 lead.

Hartselle tied the game at 14-14 when Blackwood and I. Fletcher connected for their second touchdown pass – this time a 22-yarder with 8:49 left in the first half.

The Trojans took their final lead of the game with a 17-play, 69-yard drive that started with 8:48 remaining in the first half. Their touchdown came with 1:21 remaining.

The Tigers answered back with a seven-play, 76-yard drive that ended with a Blackwood 20-yard touchdown pass to Ri Fletcher to tie the game at 21-21 at the half.

“We chose to defer our choice to the second half, and we converted on that choice,” said Hartselle Coach Bryan Moore. “The scores at the end of the first half and the start of the second half were huge for us.”

The Tigers received the second-half kickoff and took their first lead with a five-play, 76-yard drive. Blackwood hit I. Fletcher with a 39-yard pass, and then R. Fletcher scored two plays later on a 48-yard run to put the Tigers up 28-21.

Walker Hoyle intercepted a Muscle Shoals pass that gave the Tigers their first defensive stop with 8:24 left in the third.

The Tigers couldn’t capitalize on the turnover and were forced to punt.

Eli Tidwell’s punt hung in the air, and following the fair catch signal by the Trojans returner, the ball slipped through his hands, and Treyce Oden recovered the ball for Hartselle at the Trojans’ 25-yard line.

R. Fletcher pushed the lead back up to 14 with a 24-yard run, a little over a minute into the fourth quarter. The scoring drive was five plays for 53 yards.

The Tigers answered with their longest drive of the game: an 11-play, 76-play drive that culminated with a 28-yard field goal by Crawford Lang to push the lead to 45-35.

The Hartselle defense got its second stop, forcing the Trojans into a turnover on downs with 1:37 left in the game.

R. Fletcher capped off his performance with a 48-yard scoring run down the Hartselle sideline to give the Tigers a 52-35 lead.

“This is another step toward our goal for the regular season,” said Moore. “We have won the last two times we have played at Muscle Shoals after losing five straight. The Trojans are a talented team, and tonight’s game was a battle between two great teams.”

Blackwood finished 13 of 18 for 208 yards and three touchdowns. I. Fletcher had five receptions for 125 yards and two touchdowns. Tidwell had two catches for 45 yards, and RJ Gray had two for 28 yards.