Hartselle pulls away for a 45-34 win over Athens 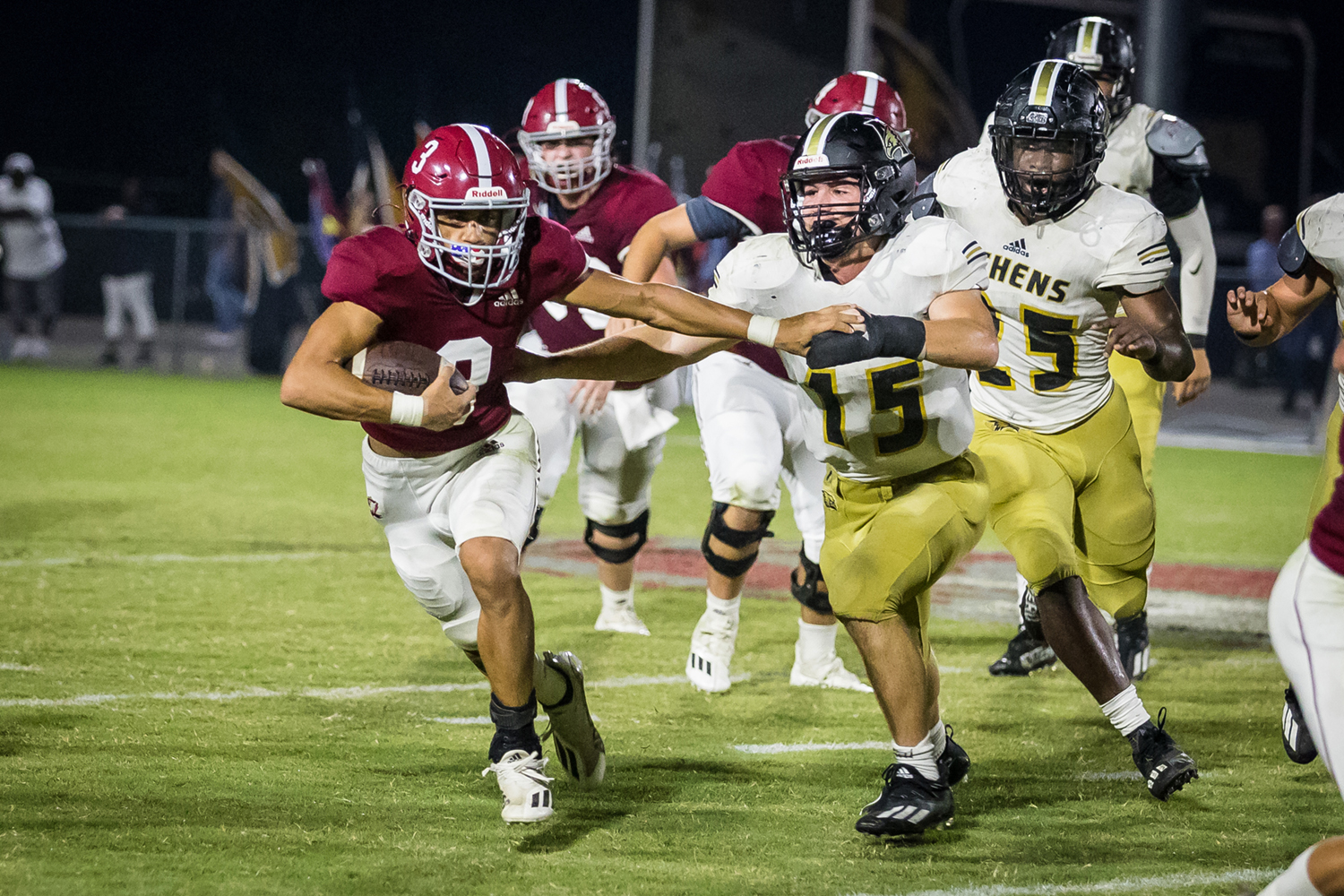 Hartselle scored 21 consecutive points in the second half to turn a 27-24 deficit into a 45-34 win over the Athens Golden Eagles Friday.

The Tigers improved to 7-0 overall and 4-0 in region play, winning over the defending region champs.

Hartselle looked to be on the way to an early lead, driving 50 yards on the first possession to move the ball to the Athens 13-yard line. However, a bad snap led to a loss of 25 yards and forced a punt from the Golden Eagles’ 38-yard line.

After an Athens’ punt, the Tigers went 73 yards in six plays to take a 7-0 lead: Ri Fletcher scored on an 18-yard run with 1:07 remaining in the first quarter. The drive was powered by a 15-yard completion to Armadheo Dunigan and an 18-yard pass to Izayah Fletcher.

Athens answered with a Jaden Jude 7-yard run with 7:39 left in the second quarter. Peyton Steele leaped in the air and blocked the extra point to give Hartselle a one-point lead at 7-6.

Hartselle extended that lead to 14-7 with a seven-play, 75-yard drive culminating with a Blackwood 2-yard touchdown pass to I. Fletcher with 4:43 remaining in the second quarter.

The drive’s big play was a 48-yard pass from Blackwood to I. Fletcher that moved the ball to the 1-yard line.

The Tigers recovered an Athens fumble on the ensuing kickoff at the Golden Eagles’ 31-yard line. Hartselle capitalized on the turnover seven plays later when R. Fletcher scored from 1 yard out for his second touchdown. The score gave Hartselle a 21-6 lead with 1:47 remaining in the half.

The Golden Eagles responded with a three-play, 78-yard drive that took 38 seconds off the clock. Jude completed passes of 16 and 50 yards to set up his 10-yard touchdown run with 1:09 left.

After a Blackwood interception on the Tigers’ first play of the next drive, Jude scored from 12 yards out to cut the Hartselle lead to 21-19 with 47.6 seconds remaining in the half.

The Tigers extended their lead to 24-19 as Crawford Land hit a 35-yard field goal with no time on the clock. The field goal was set up by a 20-yard R. Fletcher run with an additional 15 yards added to the end of the run because of an Athens’ facemask penalty.

The Golden Eagles took the lead with a 14-play, 64-yard drive to start the second half. Jude scored his fourth touchdown with 5:12 left in the third quarter to give Athens a 27-24 lead.

The Tigers answered with a five-play, 62-yard drive on the next possession when Jack Smith scored on a 10-yard run with 3:40 remaining in the third for a 31-27 lead. The score was set up by a Blackwood to Eli Tidwell 26-yard pass and an R. Fletcher 19-yard run.

Hartselle extended the lead to 38-27 with a five-play, 47-yard drive with 8:14 left in the game. Blackwood ran the ball in from five yards out to cap off the drive. R. Fletcher had four carries for 42 yards before the Blackwood scoring play.

The Tigers pushed their lead to 45-27 with an R. Fletcher 49-yard touchdown run, and Athens scored a late touchdown to make the final score 45-34.

Blackwood was 10-of-18 for 183 yards passing with a touchdown and an interception. I. Fletcher had four receptions for 92 yards and a touchdown.

“Tonight was an important win for us,” said Hartselle Coach Bryan Moore. “We would have loved to play better than we did at the end of the first half, but our team responded in the second half and got the win.”

The win sets up a big-time road matchup with undefeated Muscle Shoals (6-0, 4-0) Friday night. The winner of the game will take a one-game lead with two remaining in region play.