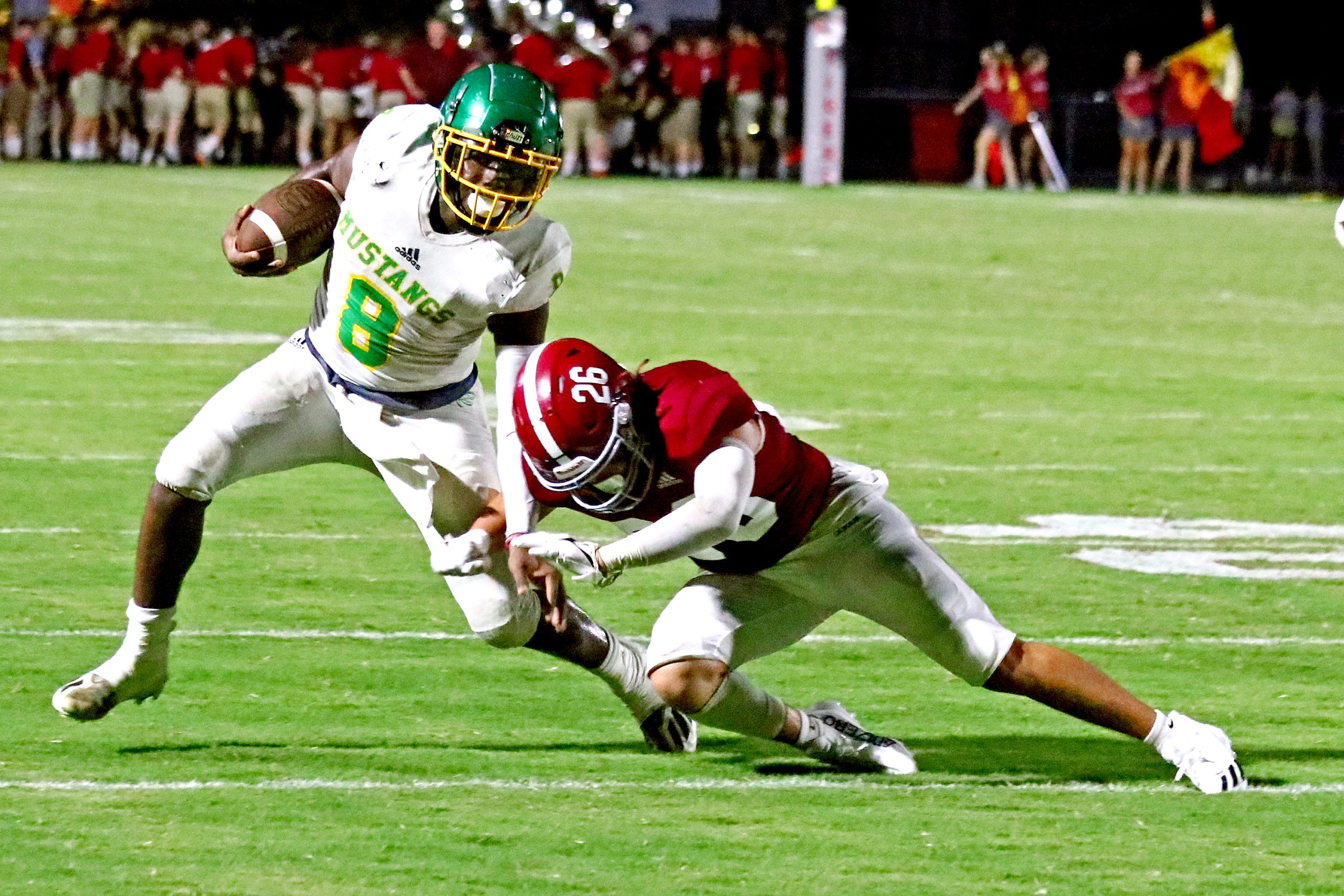 Walker Hoyle brings down the Jackson-Olin quarterback during the Tigers’ 39-6 win. Special to the Enquirer/Jim Meadows

In the words of Hartselle head coach Bryan Moore, the Tigers’ win over Jackson-Olin was ugly.

Hartselle’s offense, especially the passing game, sputtered throughout the game. They had a dropped touchdown pass along with numerous incomplete passes.

The rushing attack picked up the slack in the win. The Tigers rushed for 162 yards and three touchdowns. Ri Fletcher led the way with 119 yards and a touchdown. Quarterbacks Jack Smith and Landon Blackwood had the other two rushing touchdowns.

Despite the ugly performance offensively, the Hartselle defense shined once again. They gave up 221 total yards, only 101 in the second half. They also forced six Jackson-Olin turnovers, including three fumbles and three interceptions.

The Tigers opened the scoring with just under four minutes left in the first quarter when Fletcher scored on a one-yard run. After the missed extra point, Hartselle led 6-0.

The Tigers capitalized on the game’s first turnover when Jakaleb Goodwin recovered a Jackson-Olin fumble on the kickoff. Hartselle scored a couple of plays later when Smith ran in from three yards out to extend the lead to 13-0.

Early in the second quarter, the Hartselle defense forced a safety when the Jackson-Olin punter fell in the endzone making the score 15-0.

Less than a minute and a half later, Smith connected with Eli Tidwell for a 15-yard touchdown to push the lead to 22-0.

Jackson-Olin got on the board with 4:40 left in the first half with a 17-yard touchdown pass to make the score 22-6.

Hartselle responded with the second Smith to Tidwell touchdown pass of the night, this time for 34 yards, to extend the lead to 29-6 with two minutes left in the first half.

After a scoreless third quarter, the Tigers added 10 points in the fourth quarter to make the final score 39-6. Crawford Lang hit a 35-yard field goal, and Blackwood scored on a one-yard run with 2:37 remaining in the game.

Tidwell finished the game with five receptions for 79 yards and two touchdowns.

“We are happy with 39 points against a very good and talented Jackson-Olin defense,” said Moore. “They exposed some things that we need to improve on, but we were able to do some other things to put points on the board.”