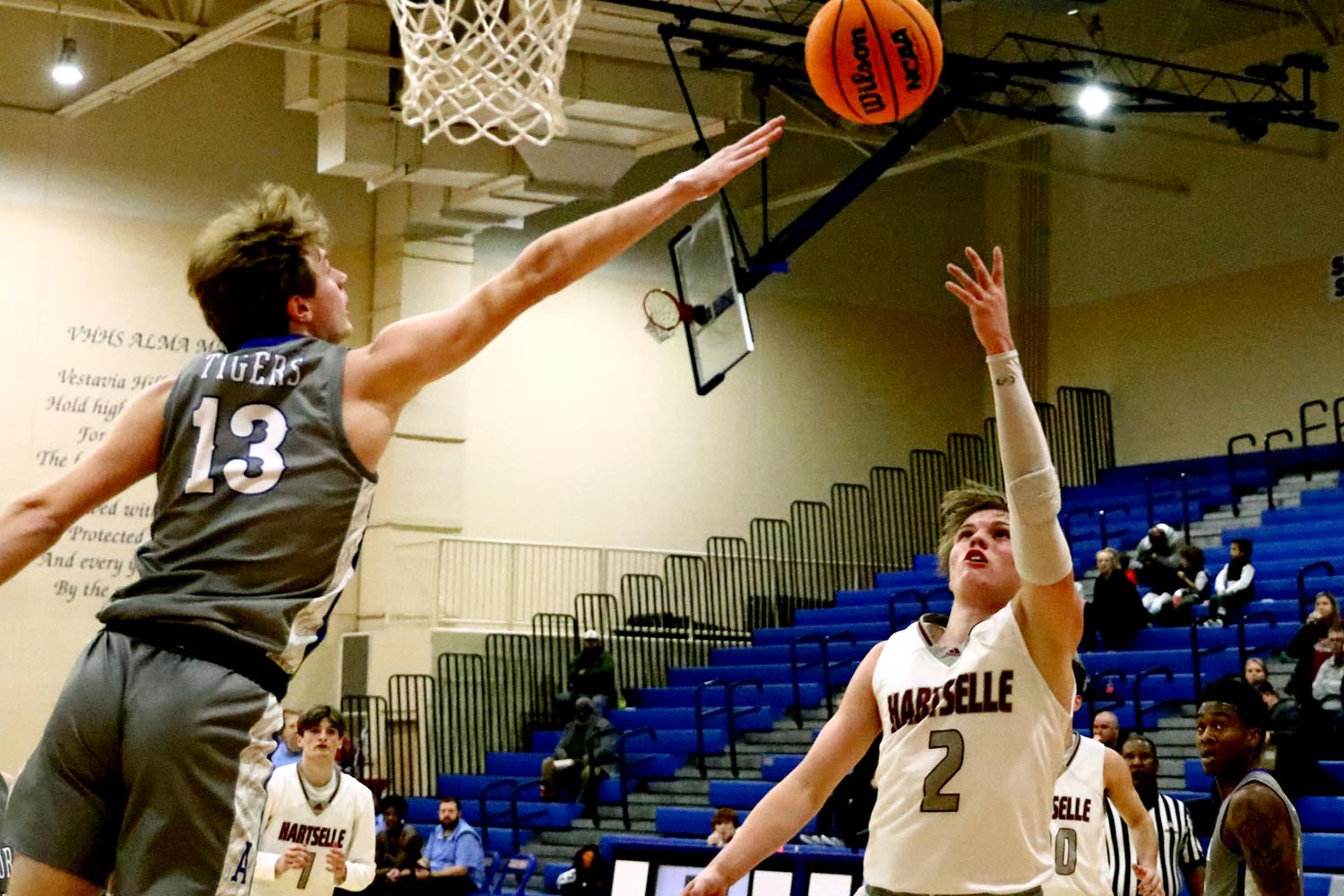 Hartselle traveled to Vestavia Hills for a matchup with 7A Auburn in the 2nd Annual George Hatchett Classic.

The Tigers found themselves in a back-and-forth battle in the first quarter. Kiah Key scored Hartselle’s first five points giving the Tigers a 5-4 lead. After an Auburn bucket, Dominic Simmons and Ryan Dunn scored back-to-back baskets to take a 9-6 lead. Auburn responded with a 6-2 run to take a 12-11 lead with less than a minute to go in the quarter. Luke Ward connected on a three-pointer as time was running out to give Hartselle a 14-12 lead heading into the second quarter.

After Auburn cut the lead to 14-13, the teams traded three-pointers with Hartselle taking a 17-16 lead. Ward and Simmons scored back-to-back baskets extending the Tigers’ lead to 21-16. After Auburn cut the lead to 21-18, Ward started a 7-0 run with his second three-pointer as Hartselle took a 28-18 lead. The Tigers closed out the quarter by outscoring Auburn 5-4 and took a 33-22 lead into halftime.

Auburn opened the third quarter 9-5 run to cut the Hartselle lead to 38-31. The Tigers responded with a 6-2 run to extend the lead to 44-33. Auburn cut the lead to 46-40 with a 7-2 run. Dunn scored four straight points to push the Hartselle lead back to ten at 50-40. Auburn hit a layup as time was running down to make the score 50-42 heading into the fourth quarter.

Hartselle got a Ward three-pointer, his fourth of the game, to open the fourth quarter. With the Tigers leading 53-42, Auburn responded with an 11-5 run to cut the Hartselle lead to five, 58-53. The Tigers answered back with a 9-4 run that included baskets from Simmons, Dunn and Itsede to take a 67-57 lead. Auburn cut the Tigers’ lead back to six with four straight points, making the score 67-61. Kiah Key closed out the game with four straight free throws to make the final score 71-61.

“We played a pretty strong first half, getting contributions from everyone that hit the floor,” said Hartselle coach Faron Key. “We struggled at times during the third and fourth quarter but found a way to answer Auburn’s runs.”

Ward finished with 21 points and four rebounds to lead the Tigers. This game was the seventh time this season that he has scored 20 or more points.

Simmons finished with 15 points, two shy of his career-high set in the Tigers 10-62 win over Columbia on December 17. Dunn added 13 points and six assists.

Kiah Key had 11 points, eight rebounds, and seven assists for the Tigers. He has scored in double digits in 13 of his last 15 games.

Hartselle has won eight of their last ten games to improve to 14-10 this season.