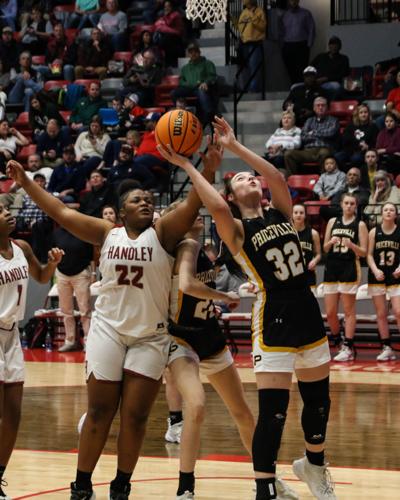 Priceville’s season ended with a 76-59 loss to Handley. The Lady Bulldogs were playing in their fourth regional in a row.

“The girls fought so hard to get back where we had been as Area champions and a return to the Sweet 16 at the Regional Tournament,” said Priceville head coach Terri Nelson. “They also added Morgan County Champions and an undefeated season at home to the resume.”

The Lady Tigers increased their lead to 34-19 at halftime.

In the third, Handley outscored Priceville 27-23 to lead 61-42 heading into the fourth quarter.

Teanna Watts finished with 24 points to lead Handley, while Takeriauna Mosley added 18 and Emilia Askew had 17.

The Lady Bulldogs lose seniors Olivia Gann, Kylie Hendrix, and Natalie Cartee from this year’s team; however, Priceville will return more than 80 percent of its scoring and 70 percent of rebounding next season. The team’s top four scorers return and six of the top nine.

“We have a lot of young talent coming back, so the future is bright for Lady Bulldog basketball,” said Nelson. “Having this year with my sister and my daughter after my dad passed was so special to my family. I know he would be so proud of the heart of this team.”