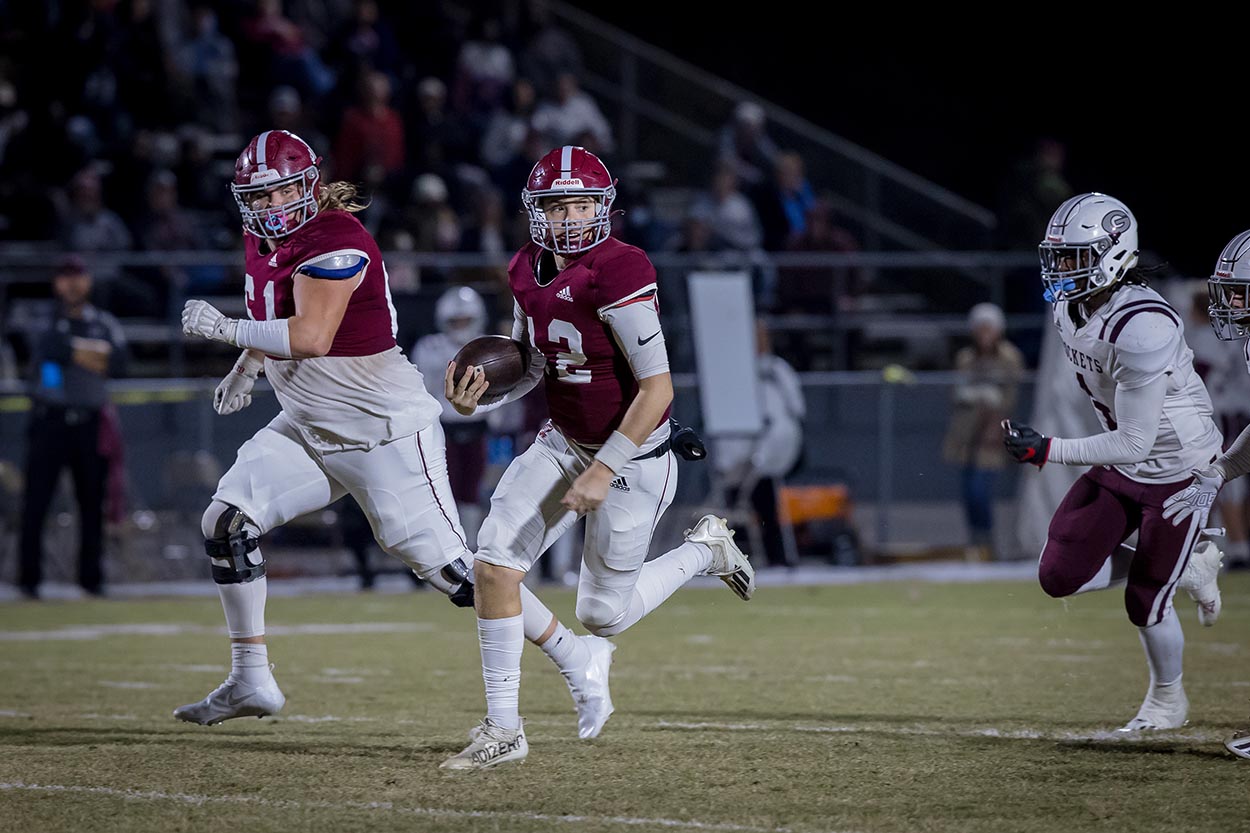 Hartselle’s undefeated season came to an end with a 35-28 loss to the Gardendale Rockets in the first round of the 6A state playoffs Friday.

In a matchup that was not a typical 1 vs. 4 pairing, the teams gave the fans a show from the opening kickoff until the final horn sounded.

The Rockets got on the board first when quarterback Tyler Nelson scored on an 18-yard run to give Gardendale a 7-0 lead with 9:38 remaining in the first quarter.

Three minutes later, the Rockets capped off a three-play, 96-yard drive with an 84-yard run to extend that lead to 14-0.

The Tigers cut the lead to 14-7 when quarterback JT Blackwood weaved through the Gardendale defense on his way to a 45-yard touchdown run with 10:29 left in the second quarter.

After a couple of possession changes, Nelson went 18 yards for his second touchdown to give the Rockets a 21-7 lead with 3:46 left in the first half.

Hartselle opened the second half with a scoring drive that took less than two minutes off the clock. Blackwood scored from three yards out to cut the lead to 21-14. Ri Fletcher had a 34-yard run down the Gardendale sideline to set up the score.

Gardendale pushed the lead back to 14 points with a 33-yard touchdown run to give the Rockets a 28-14 lead.

The Tigers, however, kept battling back. They cut the lead to 28-21 when Blackwood hit a wide-open Fletcher for a 21-yard touchdown pass with 2:52 remaining in the third.

Nelson scored his third touchdown on a five-yard run with 8:22 in the game left to give the Rockets a 35-21 lead.

Blackwood and Fletcher next hooked up again for a touchdown – this time on a 35-yard pass Fletcher laid out for in the endzone. The score cut the lead to 35-28 with 4:58 left in the game.

The Tigers looked as though they would have one more chance when they thought they had stopped Nelson short of a first down on a critical third-down run. Hartselle, however, was flagged for targeting, which gave the Rockets an automatic first down and allowed them to take more time off the clock before punting the ball away to the Tigers.

“The 14-0 start was the difference in the game,” said Hartselle Coach Bryan Moore. “I am proud of my team for battling back and making it a one-score game in the end.”

In his final game for the Tigers, Blackwood was 17 of 31 for 203 yards passing, with two touchdowns and an interception. He finished with 44 yards rushing and two scores.

“JT is a tough warrior who stood in there and fought all night long,” said Moore. “Even with a difficult night, he finished with four total touchdowns. He has had a special season for the Tigers.”

Fletcher ran for 70 yards on 11 attempts and had 92 yards receiving and two scores on seven receptions. He also had more than 100 yards in kick-off returns.

“Our seniors bought into our program and put Hartselle on their back this season,” said Moore. “When I came here, things were not good, as we were coming off a 4-7 season, but this group of seniors put their trust in my coaching staff and me and believed that they could turn it around.”

The Tigers finish the season 10-1. They will return the bulk of their offense. They averaged more than 40 points per game and put up almost 4,700 yards of total offense.