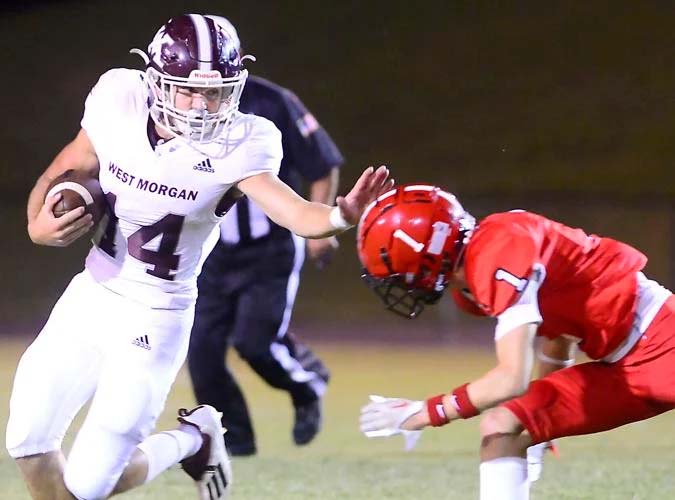 West Morgan quarterback Braxton Peters (14) accounted for four touchdowns against Central on Thursday. Photo by Kevin Taylor of the TimesDaily

Braxton Peters accounted for nearly 200 yards of total offense and four touchdowns as West Morgan continued its strong start to the season with a 42-0 win over Central-Florence in Class 4A, Region 7 play on Thursday.

The win marked four straight to start the season for the Rebels, just one shy of their total number of victories last season.

Peters got West Morgan on the board with a six-yard touchdown run with approximately two minutes to play in the opening quarter. Long touchdown runs by Jalen Fletcher (69 yards) and Peters (59 yards) extended the lead to 21-0 midway through the second quarter.

Ti’arrius Mosley hauled in a 44-yard touchdown pass from Peters with less than a minute to give the Rebels a 28-0 lead heading into the half.

Peters’ final touchdown, an eight-yard run, came on West Morgan’s first drive of the fourth quarter and a 16-yard run by Jeremy Strong rounded out the scoring with 2:53 to play in the final quarter.